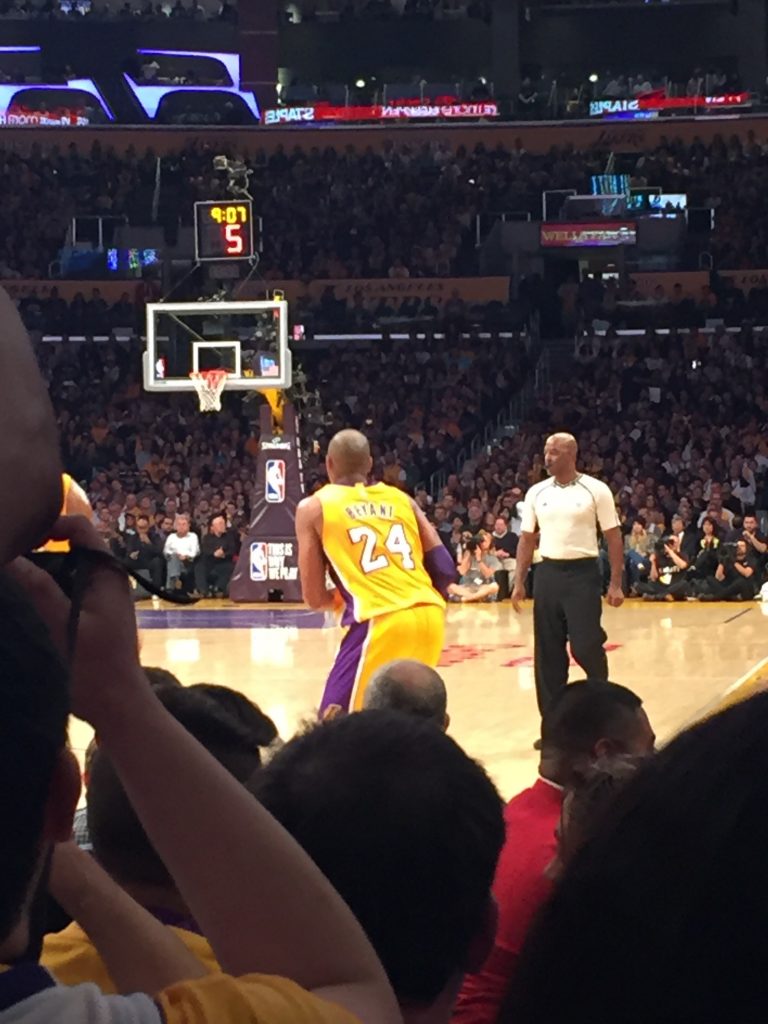 I still can’t believe my real-life superhero is gone. To us kids growing up in LA, he was it. We started wanting to be like Mike but when Kobe came along, we all found ourselves yelling “Kobe!” before shooting the ball on the court or even a piece of bunched up homework paper into a trash can at home. He’s the reason my brother and I would hoop late at night after watching a Lakers game. We’d be so hype after watching Kobe annihilate the opposing team, we’d try to do it to each other and piss off the neighbors at ten o’clock at night with the noise of two kids in the driveway dribbling, yelling, hitting the backboard at times… those memories and that feeling he gave us will never die. 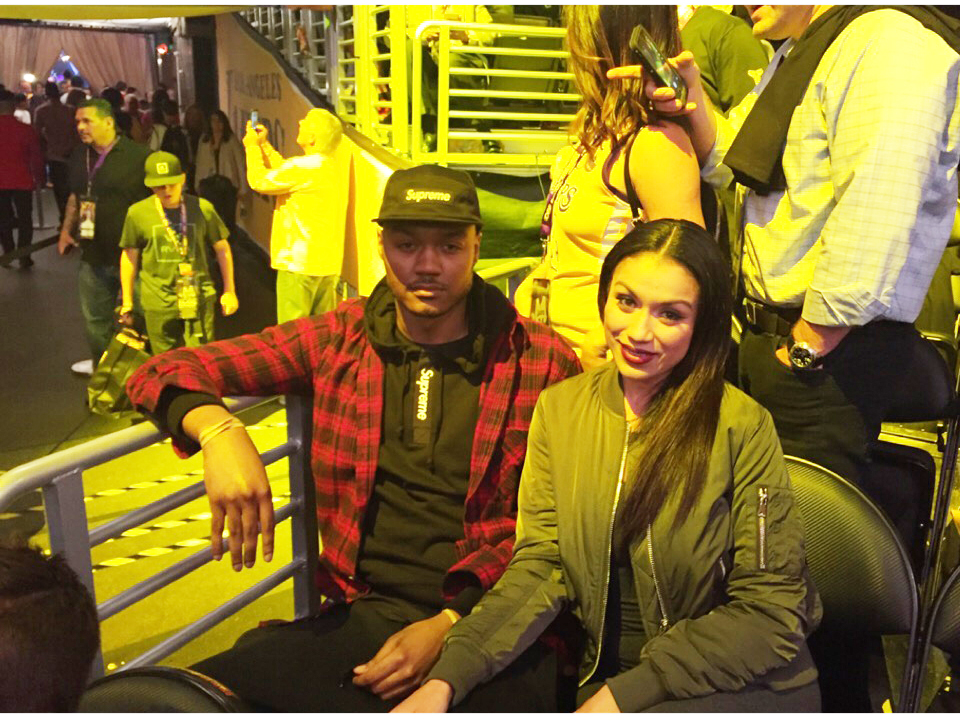 When he announced his retirement, I remember looking at Steven and saying “We’re going. I don’t care what we gotta do, how we’re going to get there, how much money it costs, we’re going.” And just as my luck would have it, they were playing Steven’s brother’s team— the Utah Jazz. With one phone call to his brother, they made my dream come true. Not only did he get us tickets to Kobe’s last game, he got us fourth row seats. I couldn’t believe it. 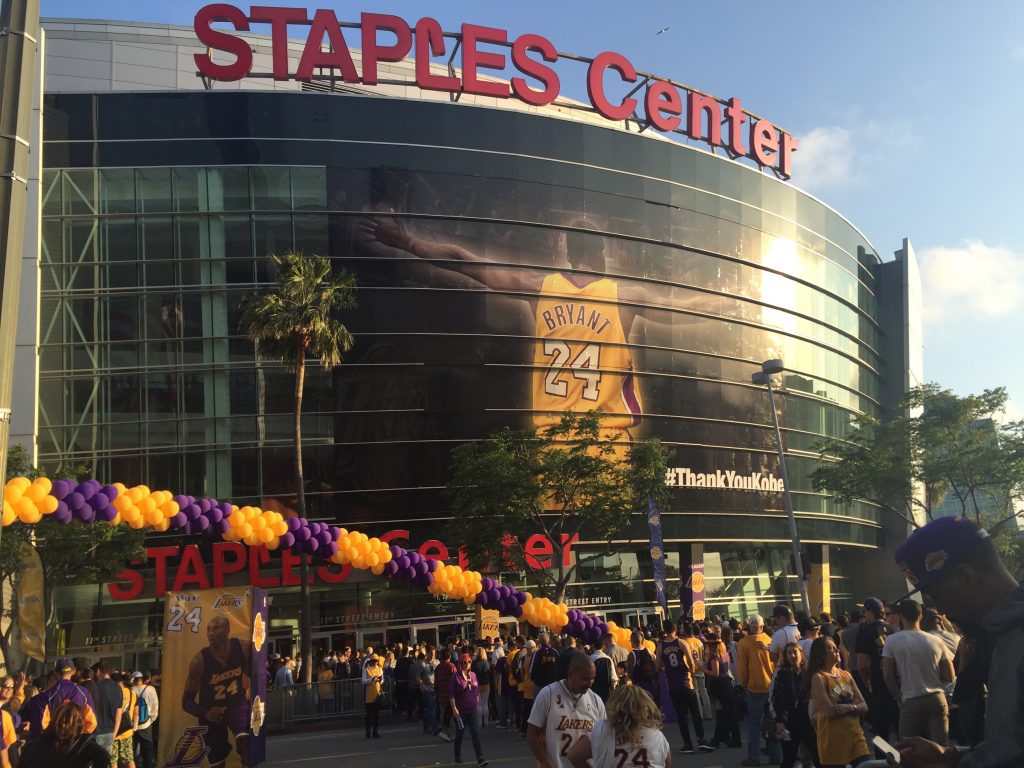 Fast forward to earlier this month, I found myself looking up flights and hotel rooms to book to celebrate Kobe at his memorial service at the Staples Center, just like Steven and I had done for his last game. Suddenly I just stopped. I realized I wanted the last time I celebrated Kobe at the Staples Center to be during his last game when he dropped 60 points and had the whole arena out of their seats chanting “Kobe, Kobe!” That’s how I want to remember Kobe at the Staples Center. That feeling of watching my super hero bow out with such an amazing speech and watching the way he looked over at his wife and his girls is exactly how I’m going to remember that arena. 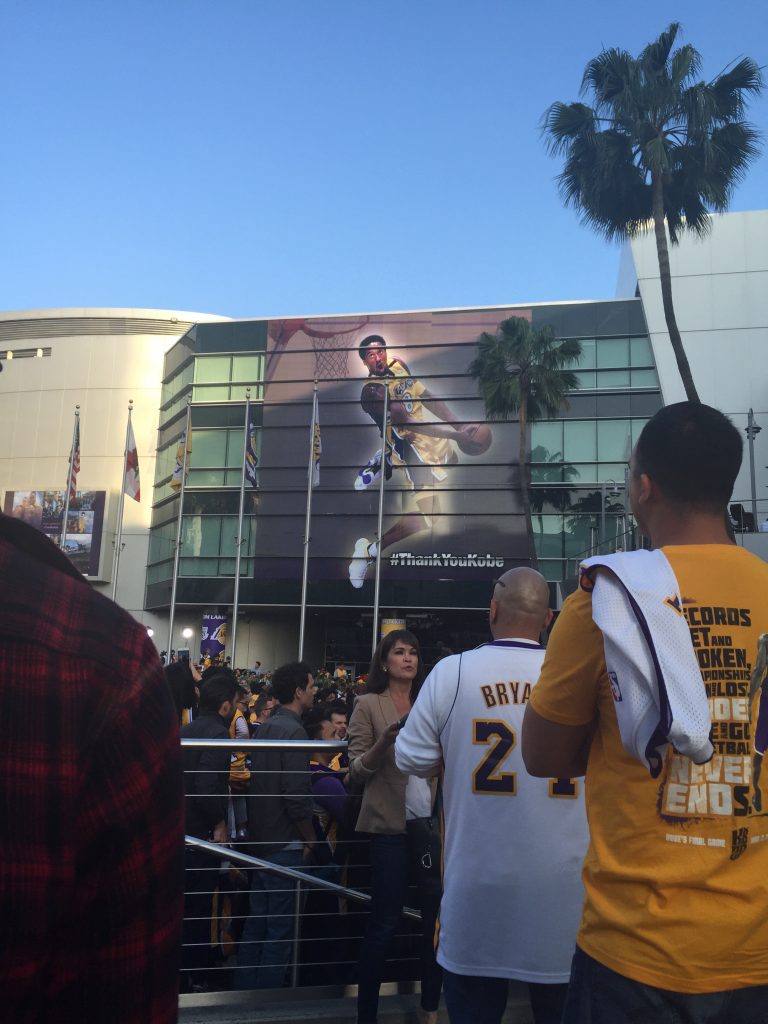 So many people from around the world were there. He brought people from different LA neighborhoods together. I would visit family in East LA and they would be talking about Kobe with so much pride. The next week I would be visiting the other side of my family in Compton and they would be talking about Kobe with the same type of love. It was more than basketball. Kobe brought Los Angeles together. He gave kids a dream. He gave LA what Jordan gave Chicago. He was the prime example of hard work and dedication. Following him throughout the years has in a way shaped my work ethic. If you know me, you know I take pride in knowing that I outwork almost anybody.

I regret not meeting him and taking a picture with him. Steven and I walked down there but he was flooded with so many people and fans I felt bad taking up more of his time. But yet, he stayed and signed everything and anything his fans wanted. Took countless pictures. It was very humbling to see him doing that. 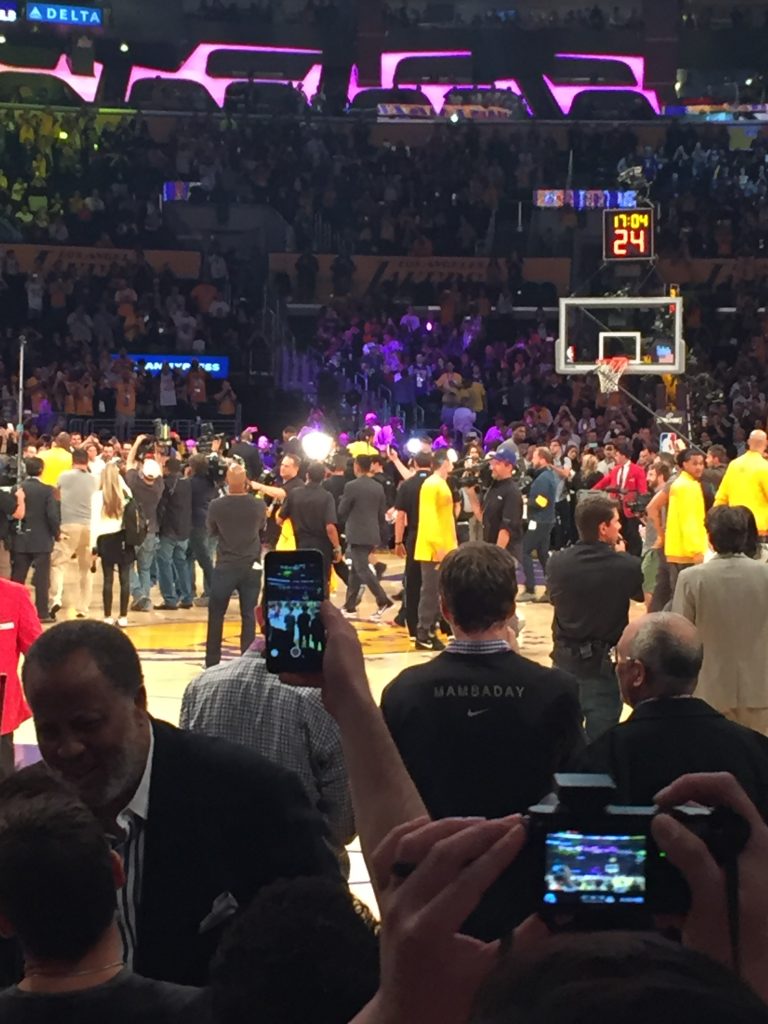 What Kobe’s passing has taught me

The day the news broke of Kobe’s crash, my text messages were non-stop. While most of my friends and family were just checking on me and how I was taking the news, others were texting to say “I love you”. It made me wonder, why does a tragedy always have to happen for people to be reminded of you? Newsflash: People don’t actually remember the times you said I love you to them, they remember the times in which you showed them. It’s easier to say I love you than to show it, wouldn’t you agree? It’s easy to say I love you and then go back to being normal. Not showing up for your people when it matters. Not checking on your loved ones because you’ve moved on or got bigger fish to fry. Don’t worry, I’m guilty of this too. 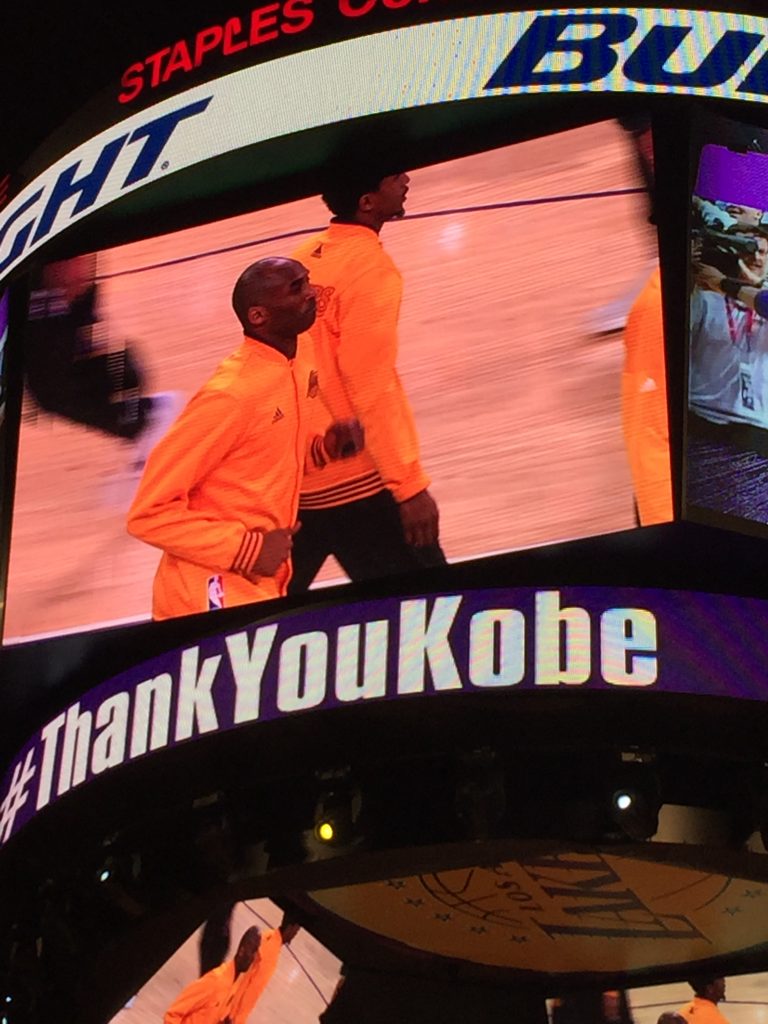 I had other goals for 2020 and this tragedy has shifted my focus. Although I do my best to show people I love them more than I tell them because I hate talking about feelings, I can do better. Kobe touched so many lives— people who he hadn’t even met. I know I can never accomplish anything as major but I can definitely start with those around me. 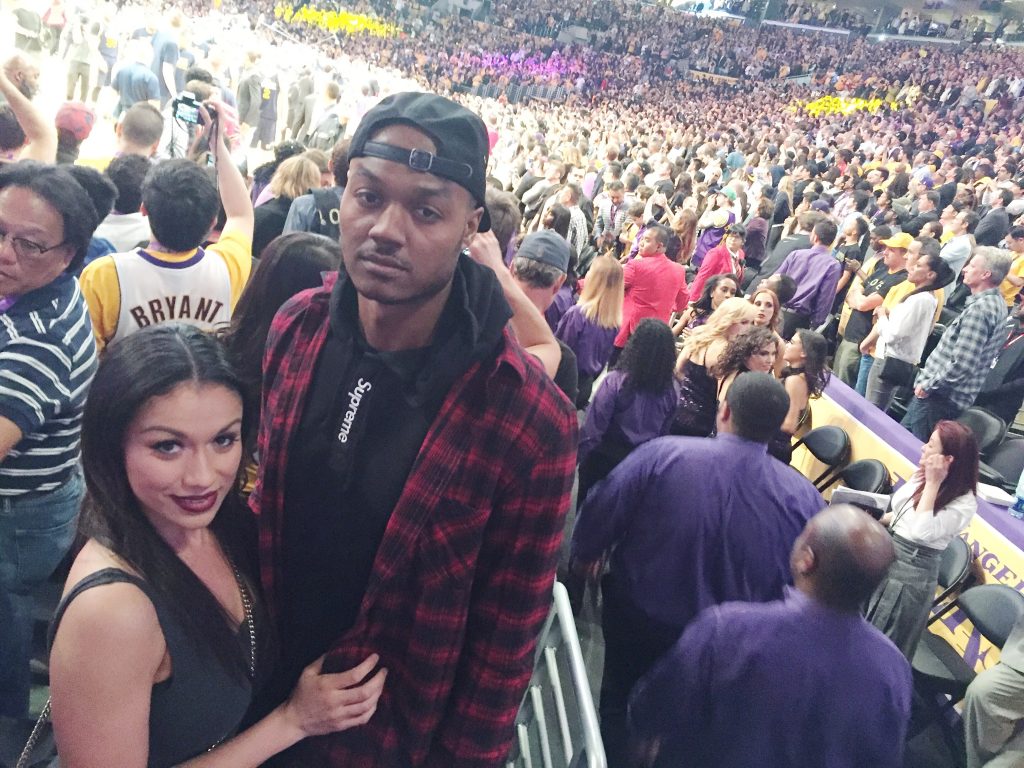 Even if you’re not much into basketball, Kobe has taught us so many lessons throughout the years, even decades. And here he is leaving us with one last one: We all don’t know our expiration dates so make sure when yours is up, you’ve left those around you with a ton of lasting impressions and loving memories to overcome those days when they will miss you the most. Take it from me, I’ve lost someone extremely close a few years back and it makes death extremely hard.

Memories never die, and to me, Kobe hasn’t either. With that being said, thank you Kobe. 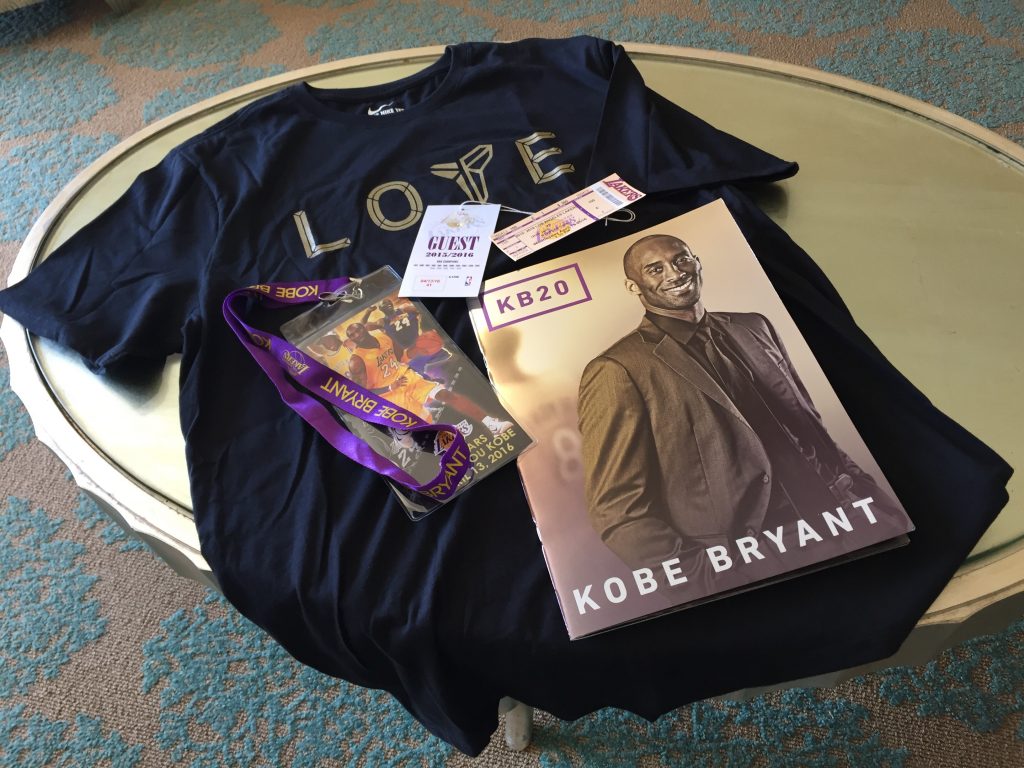 Anyone who attended Kobe’s last game got to go home with all this swag. I’ve been putting it off getting it framed but the book has a ton of images and highlights.