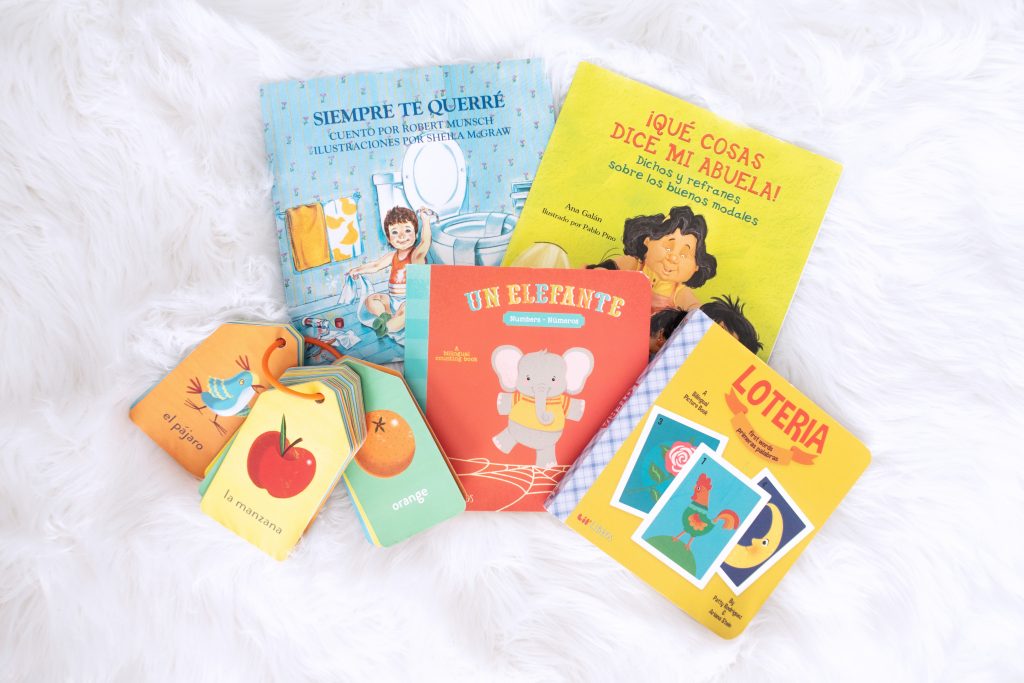 A few weeks ago I had posted an IG video on my stories of Cayden responding to my questions in Spanish. Because I had a lot of DM’s asking me if it is difficult to teach my toddler two languages, I thought I would write a post about it.

Will my toddler be confused learning two languages?

This is the most common question I’ve been asked and the short answer is yes.

The long answer goes back to Cayden’s 18 month check up. While discussing Cayden’s new acquired skills and speech, I brought up the question if, in fact, my son was taking a little longer to put more than two words together because I was confusing him between both English and Spanish. Our pediatrician said, “You are, but in a good way. It’s hard enough for toddlers to nail down one language, let alone two at the same time. But the good news is, kids that grow up speaking two languages, tend to be smarter”. As soon as she said those words, I felt so relieved.

At the time, I had been worried about my 1 ½ year old not being able to tell me simple words while other kids his age could. Of course, he understood what was being said to him, he just couldn’t communicate it back.

Now that he’s two years old, he’s answering in both English and Spanish, and at times in Spanglish. It looks like we’re on the right track so far. 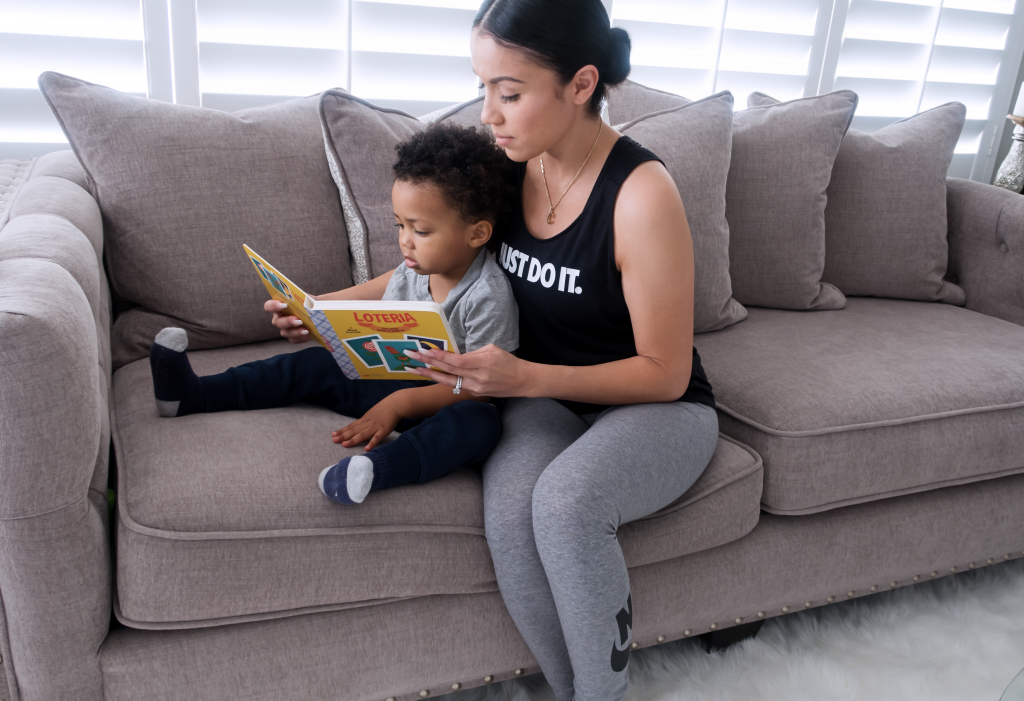 How are we teaching him both languages?

We have established a routine. As soon as daddy leaves for work, we turn English off. Since I work from home, I’m able to speak to Cayden in Spanish all day, for the most part. Everything from playtime to TV is spoken in Spanish. This way, he gets a balance of both. When dad comes back from work we switch Spanish off and English is back on for the rest of the evening.

Breakfast. This is usually Cayden’s TV time while I make his breakfast. Using Netflix, I switch his language settings to Spanish so that any show we watch has Spanish audio. Because we also have Comcast, they also have a ‘Kid Zone’ section that allows you to choose shows in Spanish. This is how we watch TV when we do screen time.

Nap time. This is our reading time. Again, because I want him to be focused, I read to him when he’s in my arms before nap time so he doesn’t have any toys to distract him. This way, when I read to him, he hears the sounds clearly and is able to interact by pointing to things in the book either on his own or if I ask him where certain things are on the page.

Playtime. My pediatrician doesn’t like Cayden to have too much screen time, but when it comes to learning a language in an interactive way, I want Cayden to use his iPad with the apps I’ve downloaded for him because it makes it fun for him. Kind of like watching YouTube channels which is every toddler’s favorite thing to do. 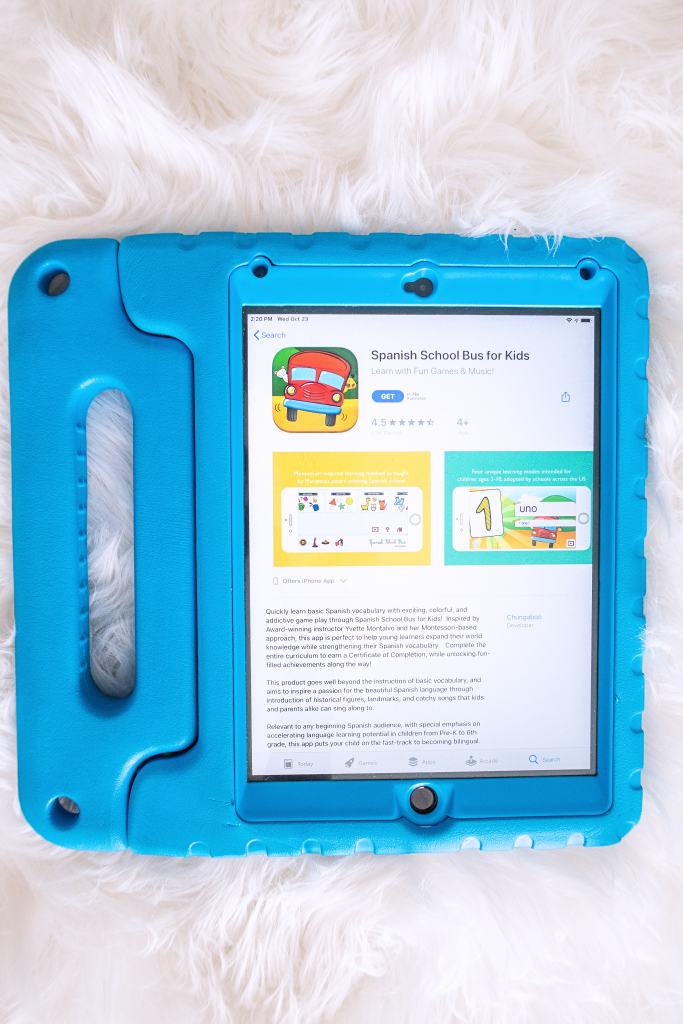 I downloaded this app called Spanish School Bus for Kids because I feel like the skill level is perfect for him to learn Spanish as a beginner. It has little music videos for songs in Spanish, it goes through numbers, and has interactive flash card games for him to get a visual of each word spoken.

For playtime, I also like toys like this bilingual book by LeapFrog. It has pages with illustrations, and as you tap each image, it says the word out loud in Spanish and english with a simple switch. Toys like these are great because it gives your toddler a break from watching screens like TV, phones, and iPads.

Outside of a schedule, I have also found a preschool that has Spanish class that will allow Cayden to start once he turns two and a half (which I’m so excited for). And in addition to a preschool, I also have been searching for a Spanish tutor to come to our home during the evening a couple of times a week to sit down with both Cayden and Steven because I really want Steven to learn it. He’s been around my family and I long enough to now pick up on some things so I know he’ll do great.

Being fluent in two languages has afforded me so many opportunities and privileges (like getting paid more than other employees at jobs because another language is seen as an asset to employers). In college, I was able to get my Bachelors of Arts by testing out of Spanish classes without paying for each. I had to pay for the test and once I passed, they gave me all the credits for my degree.

These are just some of  the reasons why I’m determined to raise a bilingual kid. He may not like it at times, but he’ll have so many doors open for him when he’s older.