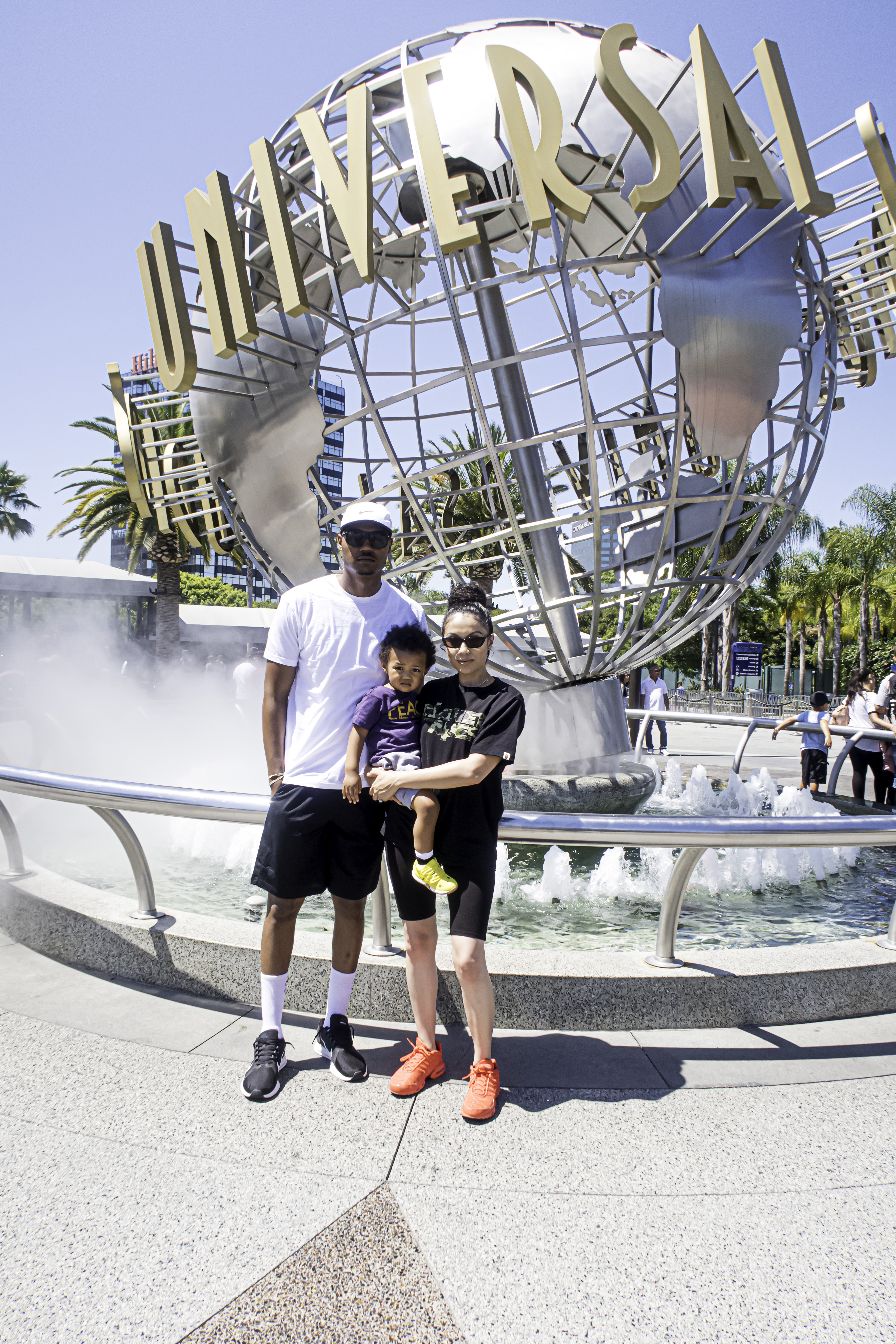 This year, for Labor Day weekend, we decided to spend the holiday in Los Angeles. Me, being the LA girl that I’ve always been, now look for any opportunity to take Cayden back to the place I was born and raised so I that I can share some of my childhood memories with him. One of them being amusement parks.

Since we took him to see Mickey at Disneyland back in May, I decided I wanted to take him to Universal Studios this time. The timing also worked out because it was our early birthday gift to him. 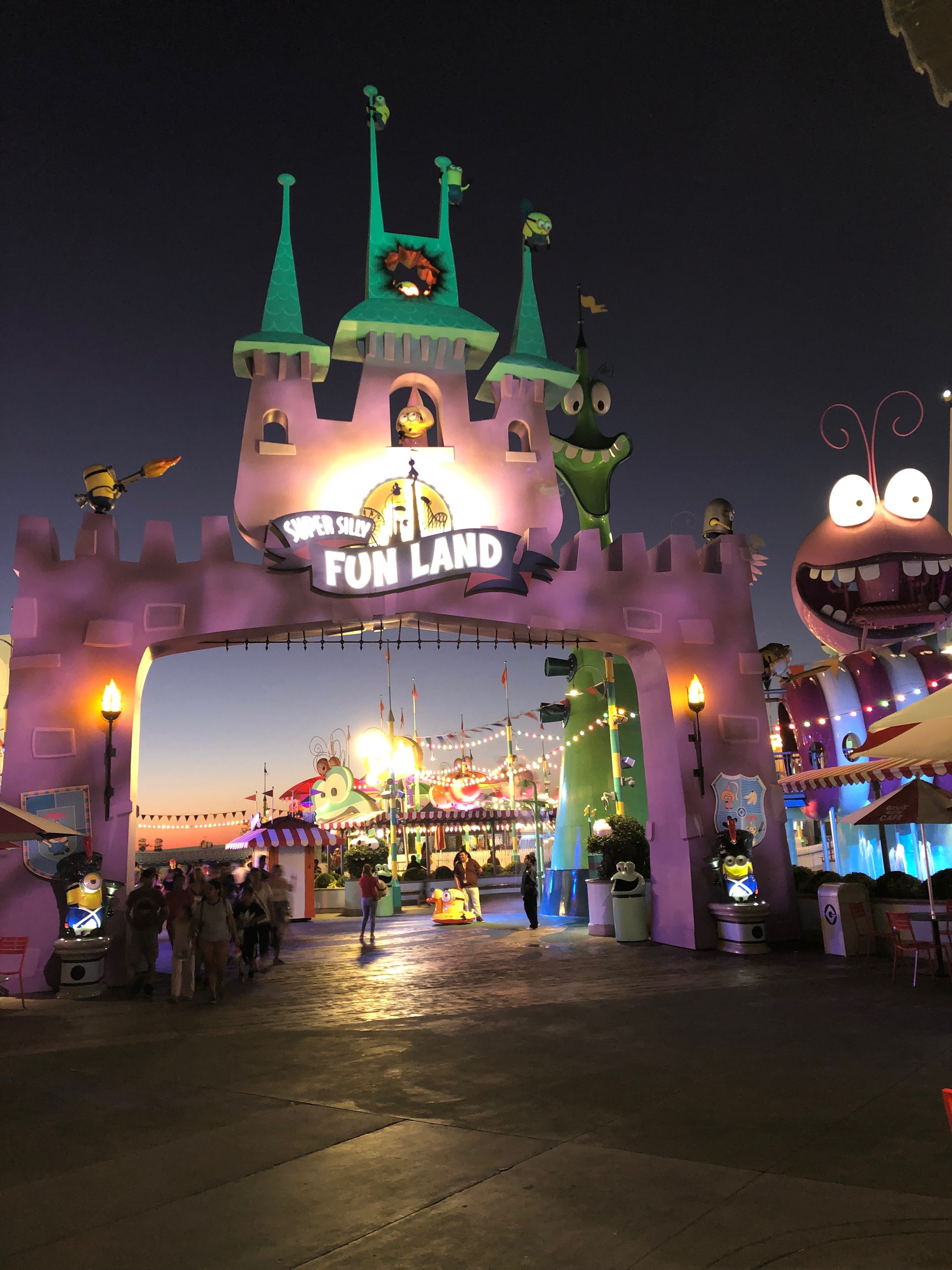 He’s obsessed with Minions, Trolls, and SpongeBob which makes sense as to why he enjoyed Universal Studios a lot more than Disneyland. The fact that they had a whole section dedicated to the Minions and the Despicable Me movie had me so excited for Cayden. He was LOVING IT! 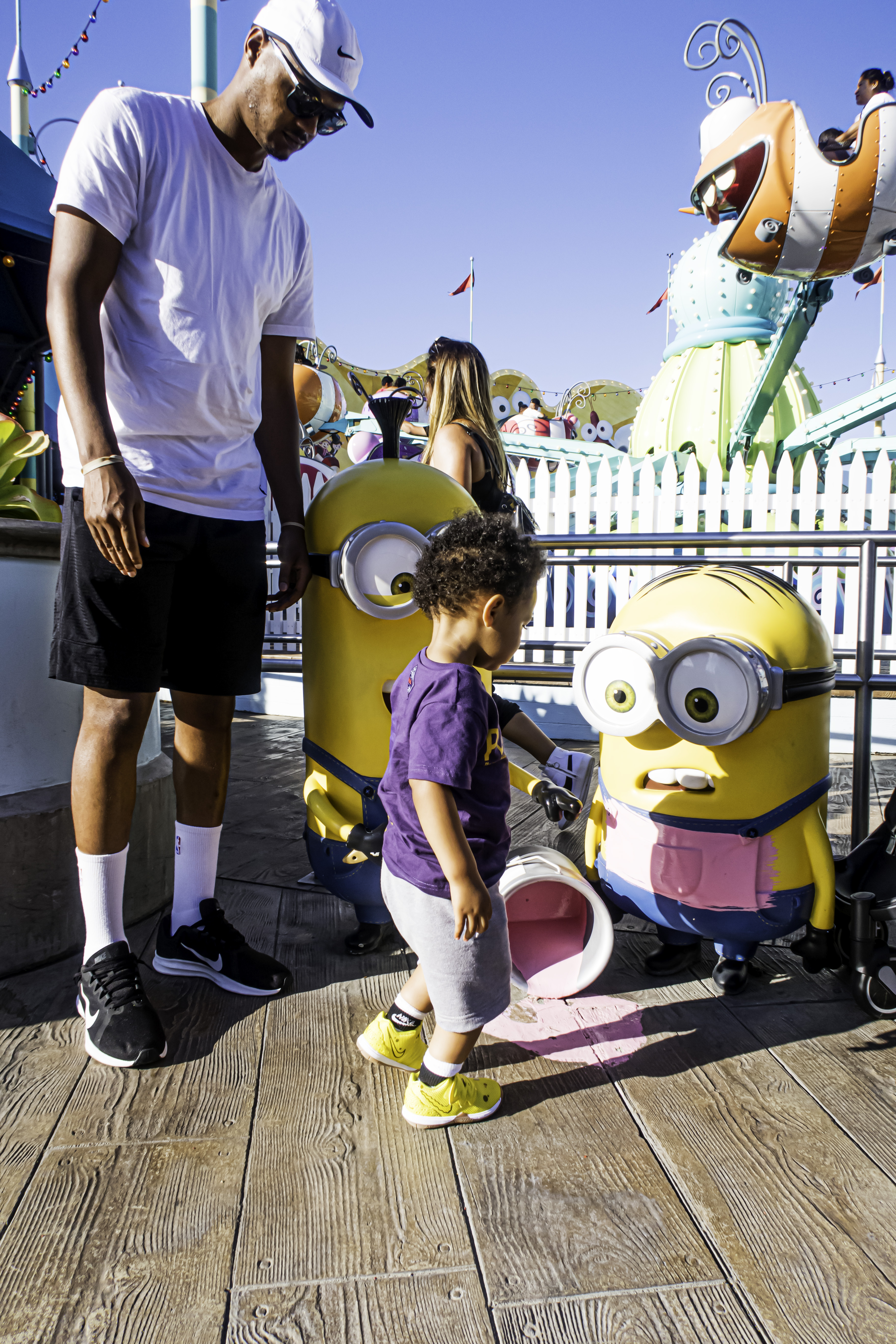 If your toddler is into the Minions, they will absolutely have a blast at Universal Studios. The Souvenir shop inside the Super Silly Fun Land is all things Minions and characters from the Despicable Me movie. Cayden was having a field day getting spoiled by his grandmother at the toy store inside. Their favorite time together is blowing bubbles so he got so excited when she pulled down the bubble gun for him. 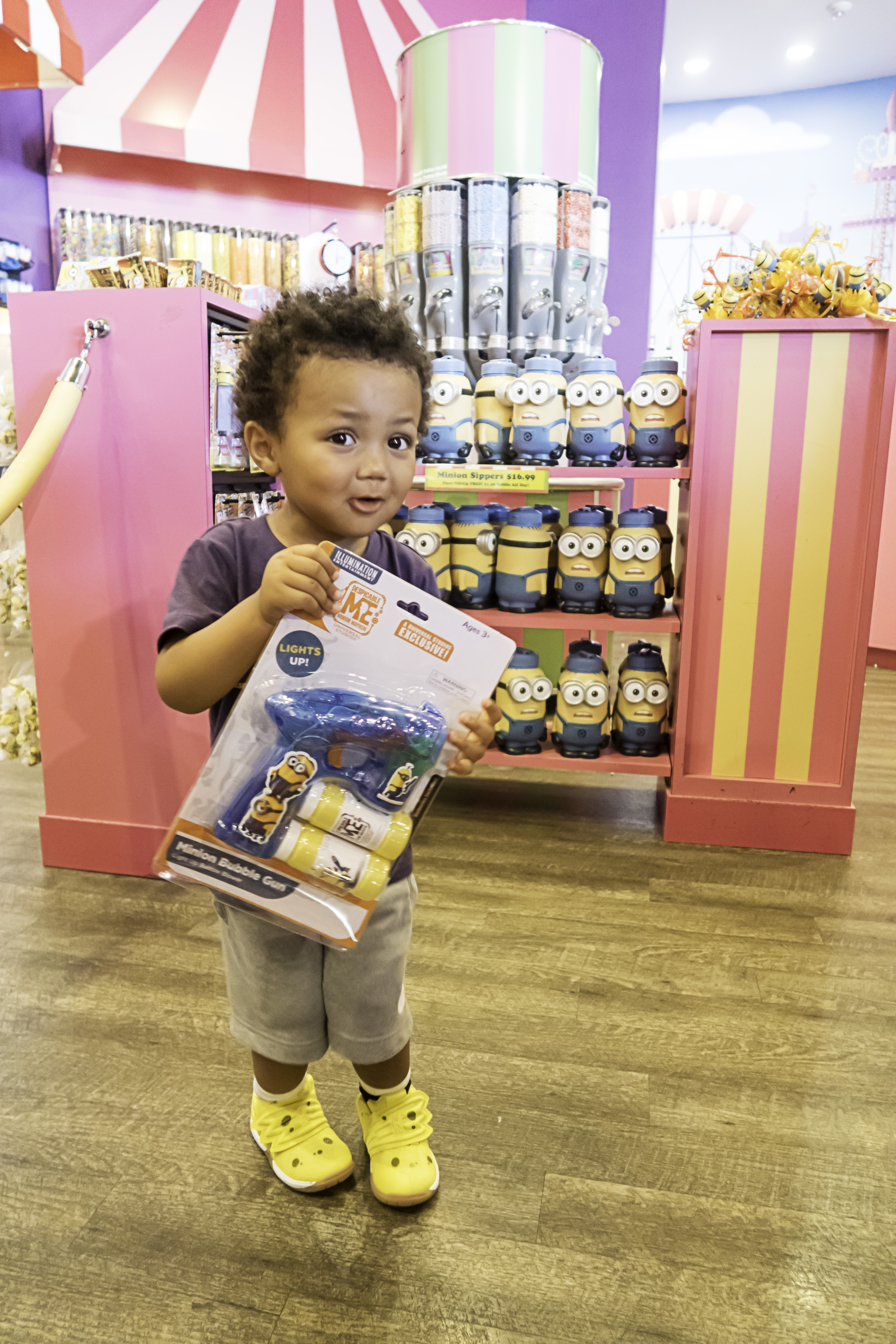 I’m not gonna lie, I was a sucker too. I love how overwhelmed with excitement he was at the Minion stuffed toys so I had to get one for him too. 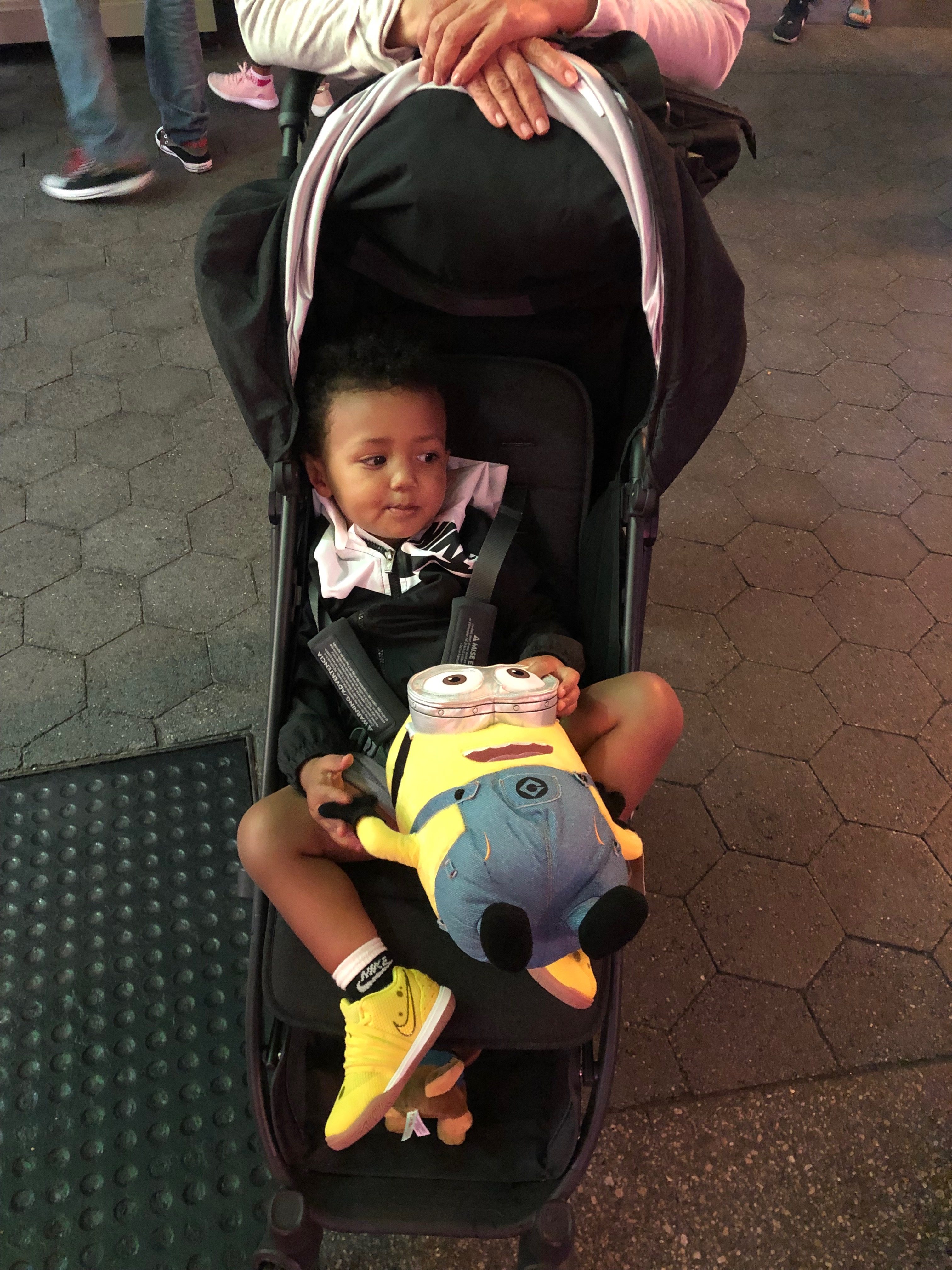 We could have easily spent the whole day at just that one section of the park. They have two rides (Cayden was too little for the one), but the water park and playground give toddlers so much to do. He was having such a blast and I was having so much fun watching him that I forgot I wanted to get on the new Jurassic Park ride (which I did right before we left the park and it was so worth the wait). 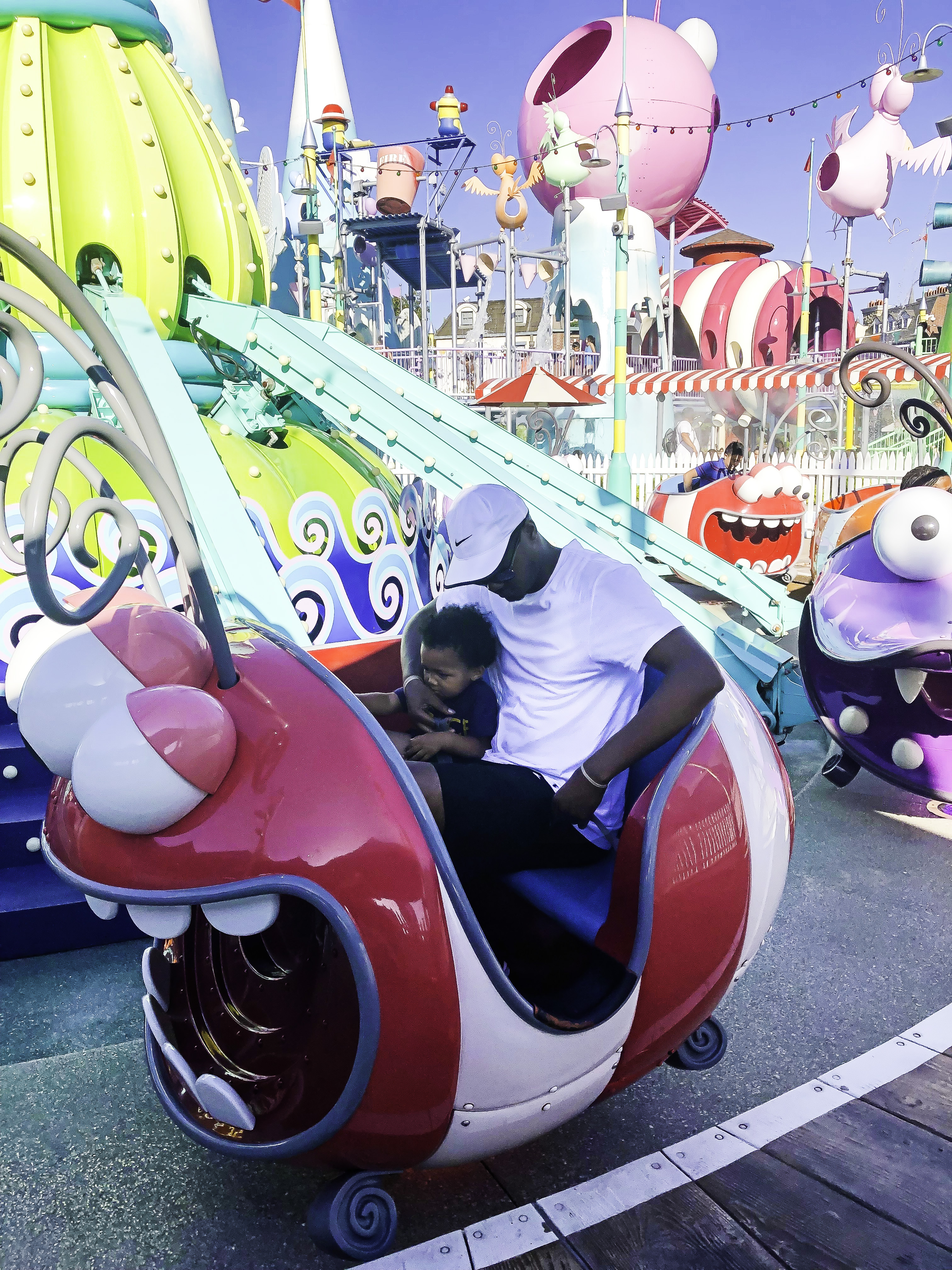 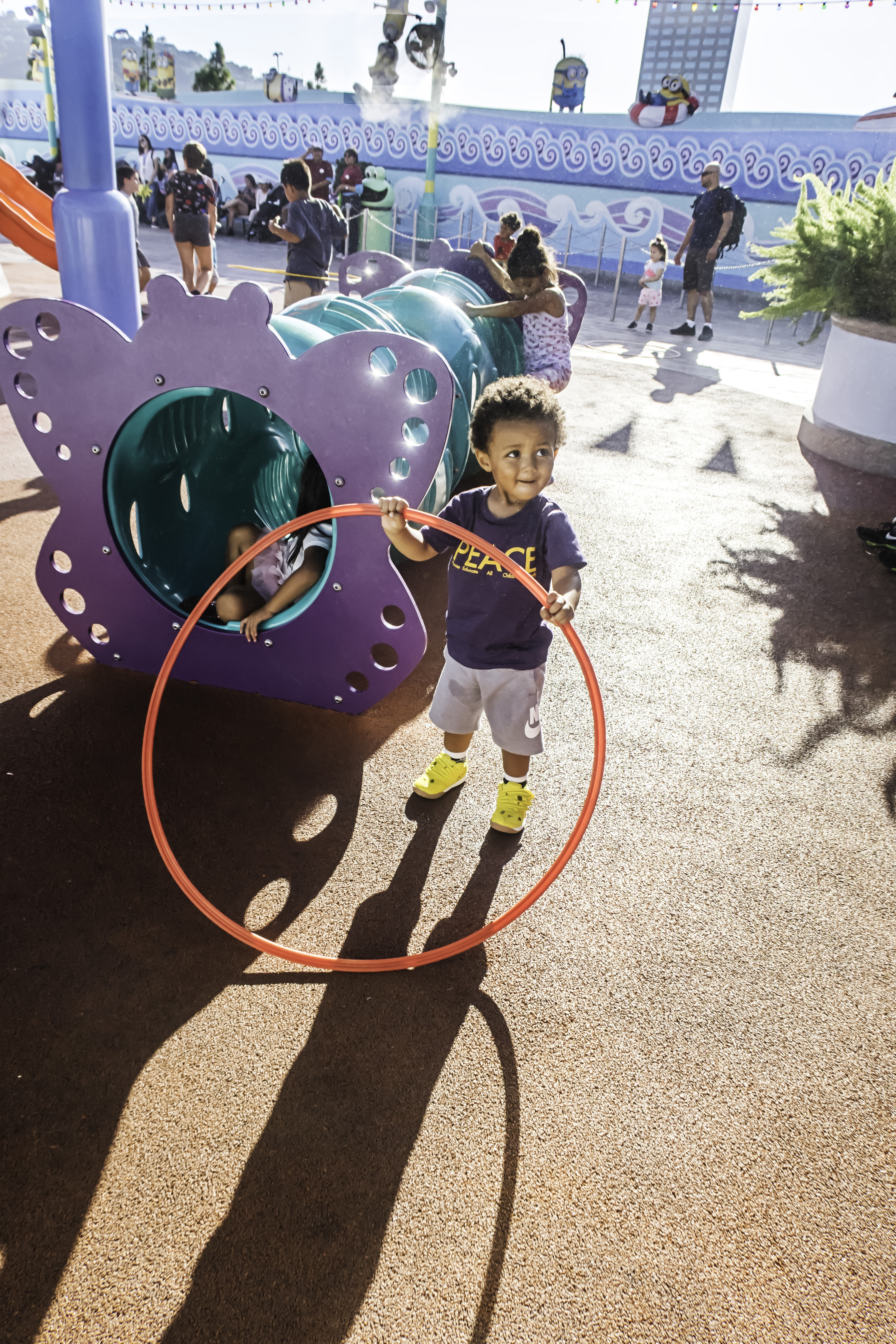 Before we hit that part of the park, Cayden saw the big splash pad that is located toward the front. As soon as he saw it, we had to spend some time there. He’s not a fan of pools, but loves him some splash pads. He loved walking through the mist ones because, if I haven’t mentioned this before, Cayden is OCD like his mom. He doesn’t like getting messy and that includes getting his shoes wet.

We would have spent a little more time with the mists but something caught Cayden’s eye. I couldn’t make out what he was looking at because he was pulling me so hard and yelling “Mob, Mob!” The whole time I thought he was saying “Mom, Mom” but he was really saying “Bob, Bob!” He had somehow seen SpongeBob walking around and went fan crazy. 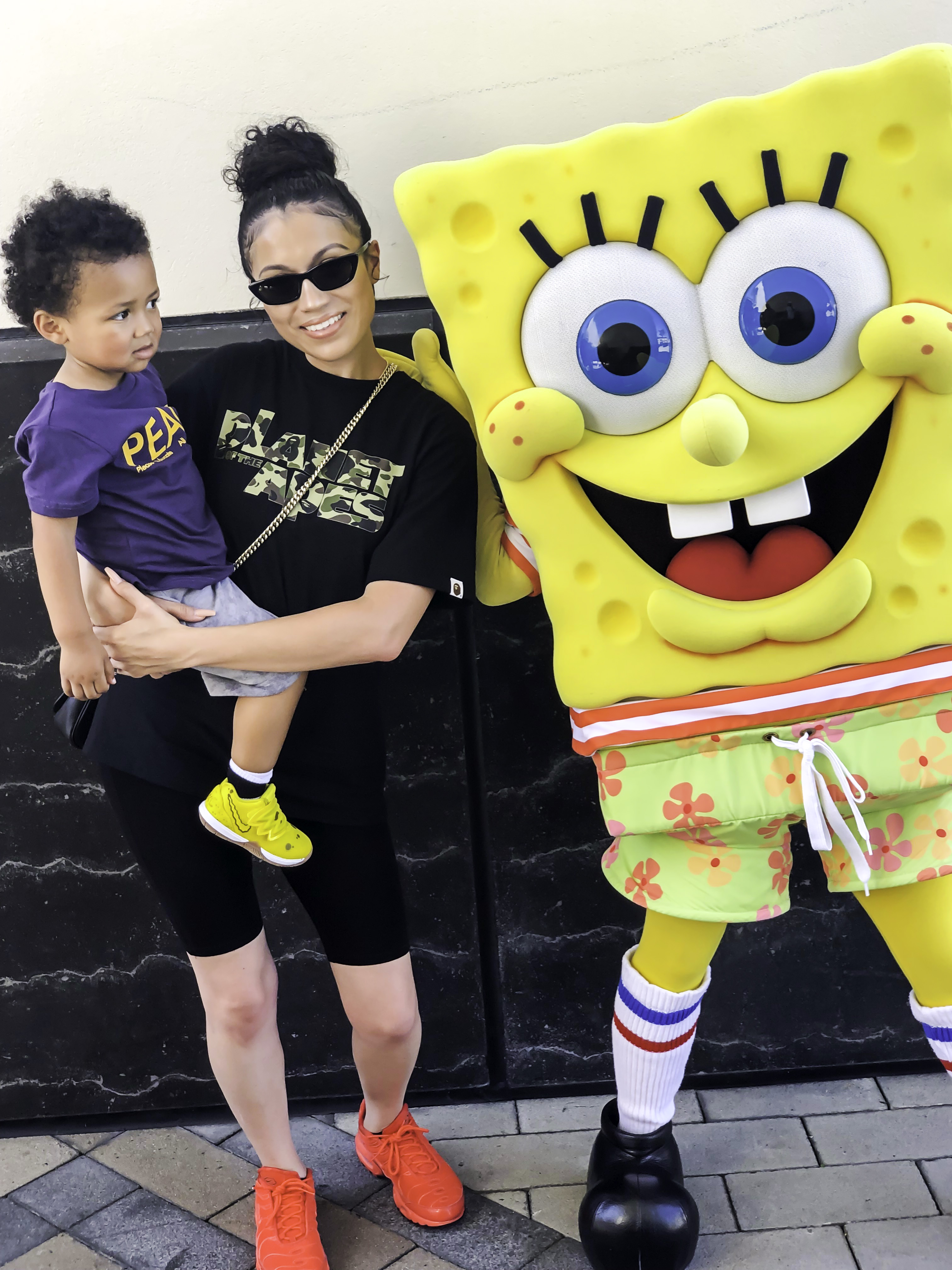 One thing about Cayden that all of our friends and family can tell you is that Cayden does not go to anyone. It caught me totally off guard that he wanted me to take him to SpongeBob. And what a coincidence it was that Cayden was wearing his SpongeBob Kyries. 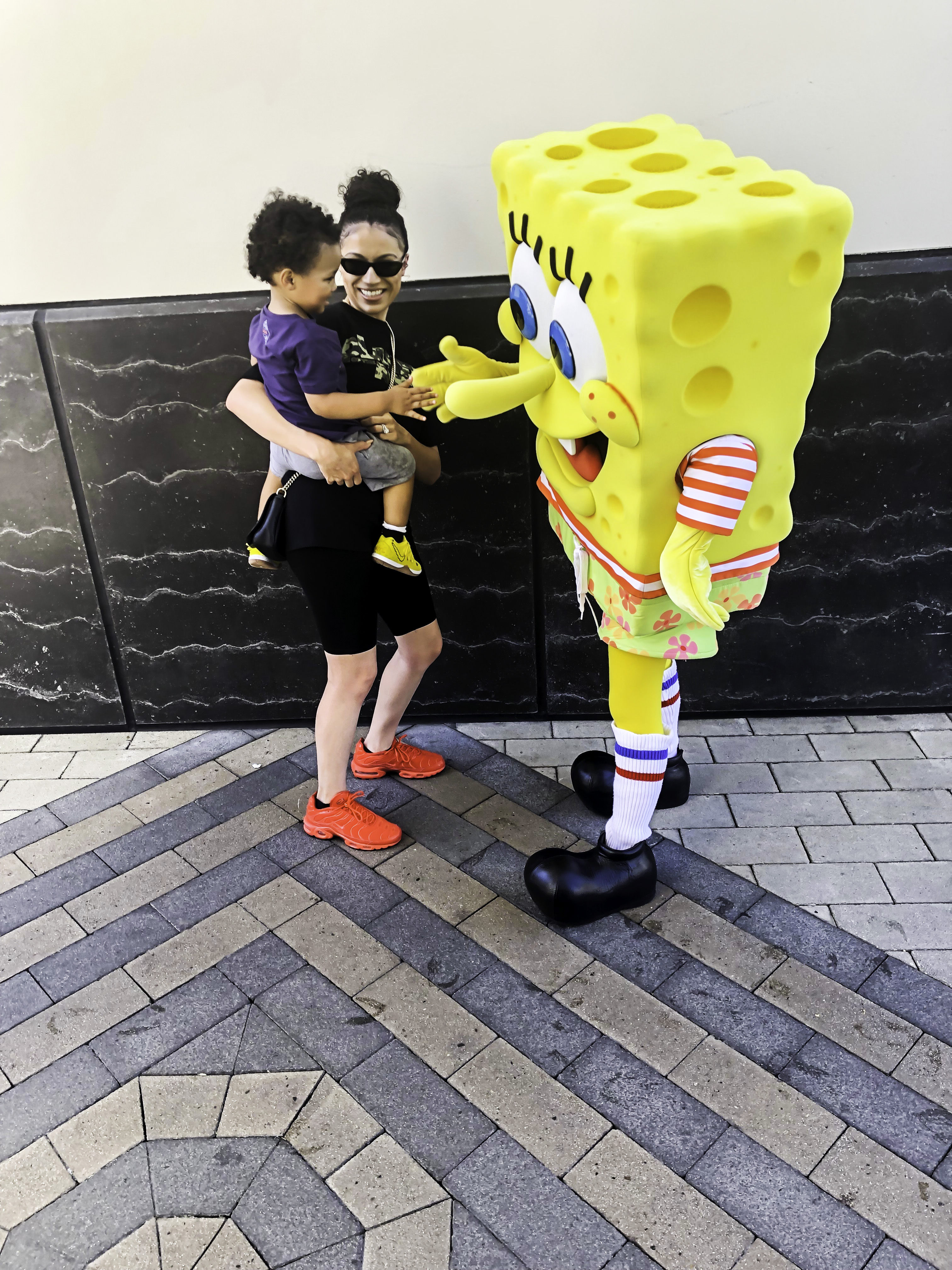 As soon as we got to him Cayden was talking (in baby language) to SpongeBob about his shoes and pointing to them showing them off. I wish Steven would have gotten video of it, it was the cutest, funniest thing to see Cayden so friendly with one of his favorite characters.

The Trolls parade was another big “WOW” moment for Cayden. One of his favorite movies is Trolls and anytime he hears a song from the soundtrack he’ll stop and point in the air and say, “Trolls”. So as they walked down to perform Cayden was clapping and dancing I just couldn’t handle all the cuteness he was giving us. 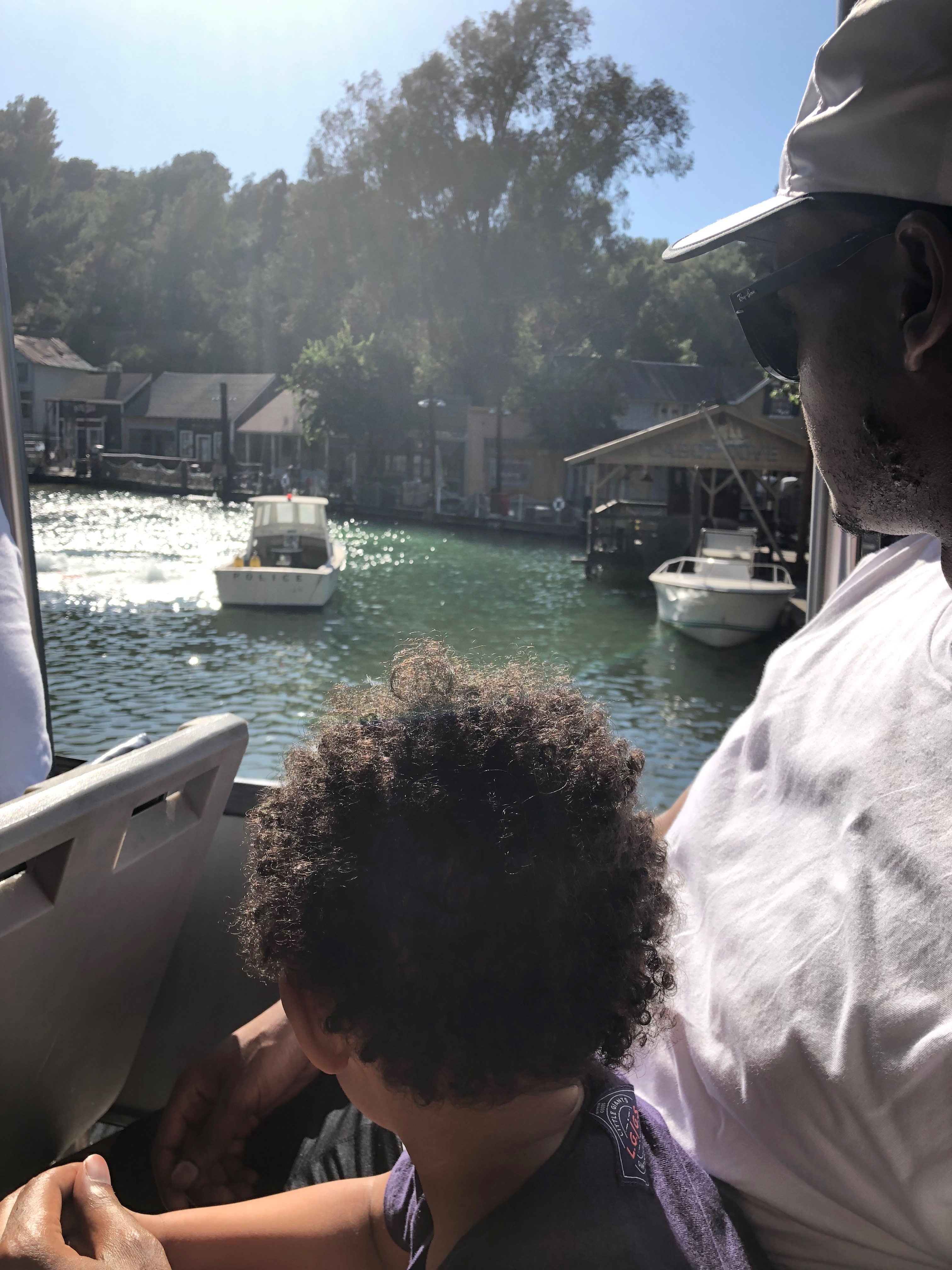 The Studio Tour train ride was another Cayden enjoyed. I thought he was going to freak out at the part where King  Kong comes to grab the train but he didn’t flinch. The little seven-ish year old boy behind us however, was screaming. I love that my baby enjoys rides like his mama. He may not be big on swimming pools and water (like his dad) but he’s so into amusement parks and rides and I definitely prefer that.

My toddler isn’t 2 years old yet. Is that too young?

When we tell people we’re taking Cayden to amusements parks, we get some backlash with the most common response being, “He’s too young”. My reaction to that is, the more he’s exposed to it, the more comfortable he’ll be with them. He may not remember this trip looking back, but watching his excitement and having so much fun is worth it for me as his mama. At this point, it’s not about memories for him as it is for me. I’m doing it for his amusement and fun at the moment in doing something totally different from his day-to-day. As a mama who grew up in LA, my mom took me to Disneyland and Universal all at the age of one, since then, we would go several times each year from then on. Disneyland, Universal, Knotts Berry Farm, Six Flags, you name it I’ve done it and continue to do it.

My mom always brags about how I was riding roller coasters since I was tall enough without fear and I honestly think it’s because she was taking me so much, since I can remember, so I’m comfortable with it. I don’t want Cayden to be one of those kids that cry on rides because they’re scared. So with each trip, we’ll be adding more and more fun. And trust me, we plan on going a few times a year, each year (LA mom things).

Previous Post: « What to Wear to Your Next Barn Wedding
Next Post: An Open Letter to My Son on his Second Birthday »