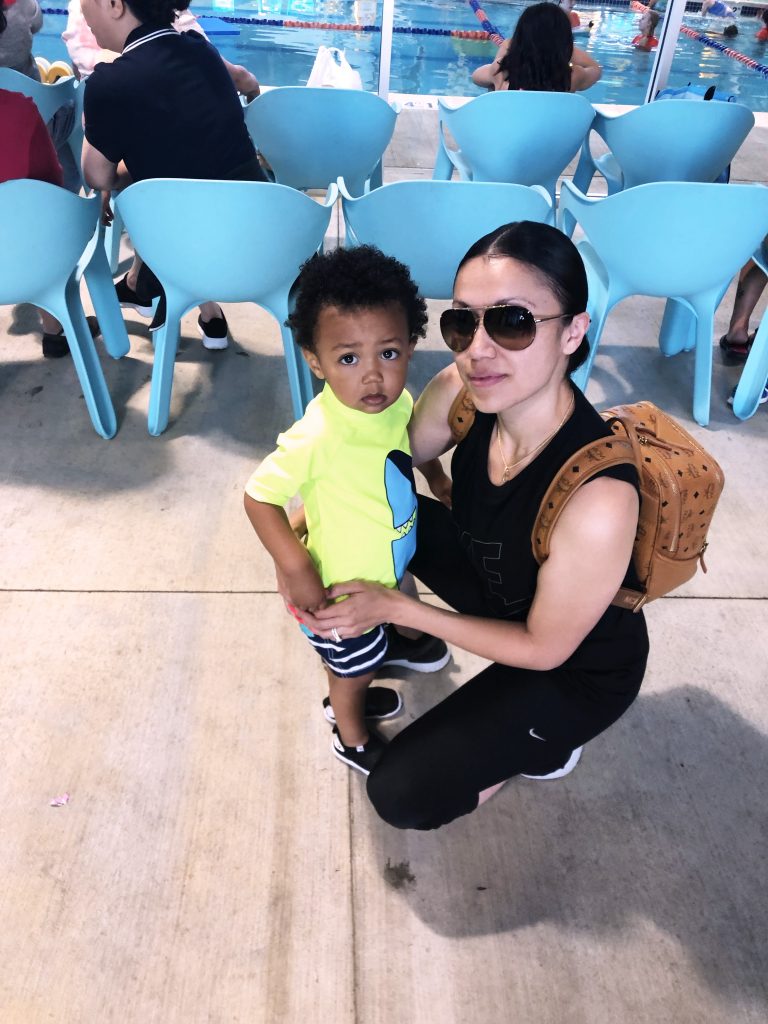 Cayden has been attending swim class for a month now. It’s crazy to see your toddler’s level of comfortability expand right before your eyes. Cayden is not the type to fly off the handle. In fact, he’s observant more than anything. Honestly, I’m extremely grateful for that. I don’t have to worry about him getting into trouble like getting into cupboards, crawling into spaces, or following what other kids do. He’s the type of kid that has to watch carefully before he tries anything. If, after watching, he’s not sure— he’s not going anywhere near it— and that’s including people.

With that being said, our first day of swim class was more exciting for me than it was for him (or his dad). As soon as we got to the door, you could tell he was unsure. While we waited in the sitting area, he watched the other kids in the pool and clenched my hand.

At that moment I knew he was nervous and things weren’t going to go as smooth as I had hoped.

The class Cayden attends is called the mini because he’s under two years old. For this class, parents are required to get in the pool with their kid. There is only one instructor, however, the classes only have a max of 5 kids. Sometimes, there are only one or two other kids besides Cayden. Even with 5 kids, the instructor is very attentive and I notice that they give each kid equal time and attention, correcting form or applauding good work.

For this age group specifically, safety is a big concern and what their lessons mainly focus on.

Every class is 30 minutes and each class consists of practicing how to get in and out of the pool properly, how to flip over onto their backs and float if they fall in the pool, holding their breath underwater, while still mixing it with some playtime that includes riding the canoe and going down the water slide.

Cayden absolutely hates water on his face so the underwater thing made him freak out the first time and one month later, still does. This last class we attended, I have to say, was a little better and I don’t know if it’s because he’s getting more comfortable or because he is learning how to hold his breath.

I’ve also noticed that he smiles more and is calmer now than on his first day. He does have moments where you can hear him yelling “No!” through the glass window when he doesn’t want to do something, but for the most part he’s getting better. On his first day, all you heard was “No” coming from him and resisting everything the instructor wanted him to do.

I recommend starting swimming lessons for babies as soon as you can, definitely earlier than Cayden’s age so that they don’t have as much fear of water.

Whichever school you pick, I’m sure they will provide you with a list of what you need to bring with you to swim class. But if you want to get an idea, here’s a list of what we pack for swim class and what to expect.

Here’s what to bring to your baby’s first swim class:

Here’s what to expect:

I’m sure this won’t be my last swim related post. As a proud mama, I’ll want to share with you new milestones and accomplishments from our little guy so keep an eye out for more!