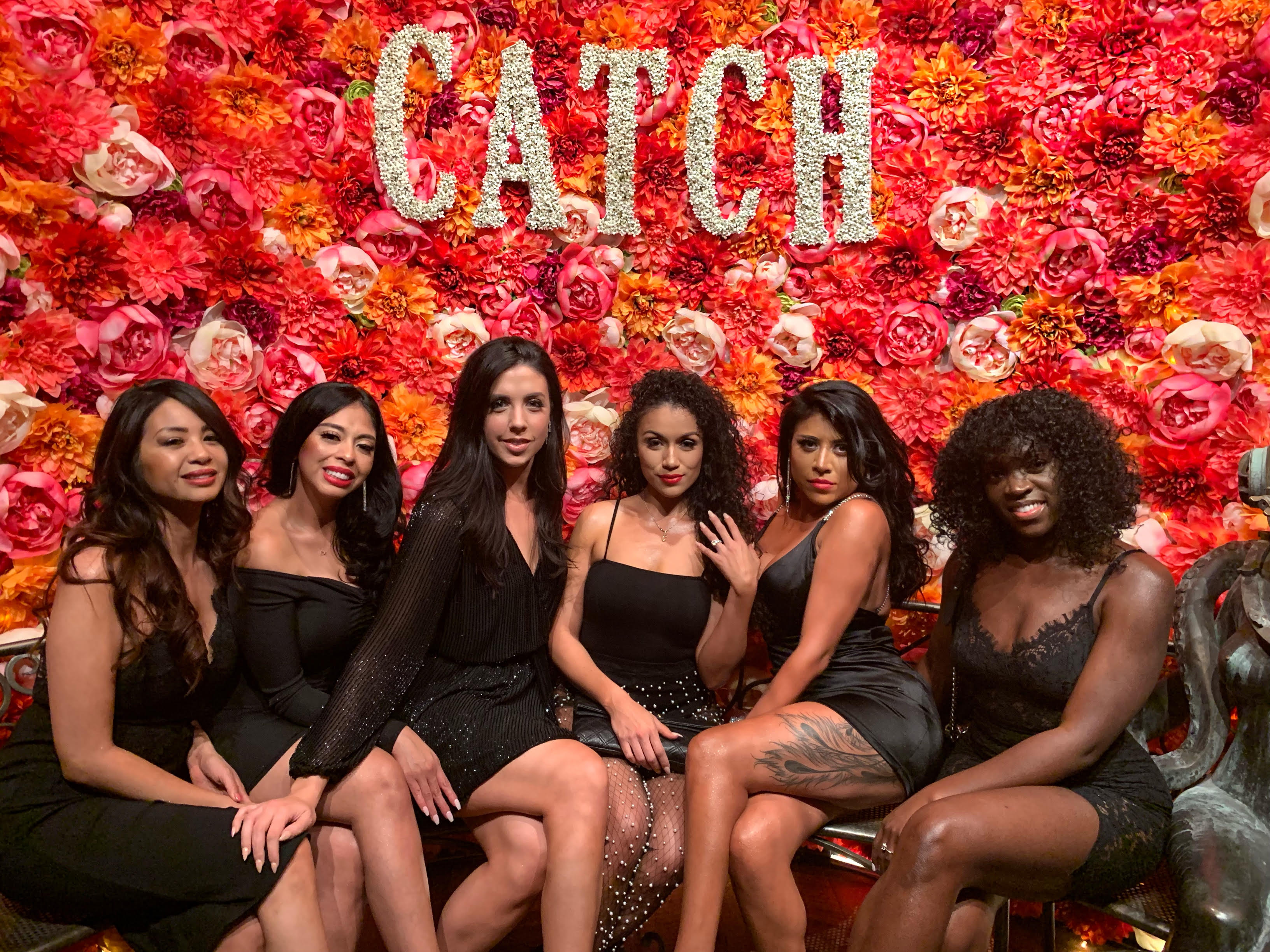 Catchy little title right? My best friend Cindy came up with it as she was starting to make our Memorial Day weekend itinerary for my bachelorette. I need to start off by giving her all the thanks in the world for going above and beyond for me. Especially, because again, this was one of those things I didn’t want.

At this point in my life, I felt like a bachelorette was a bit ridiculous. I already had the man, the baby, the house. I didn’t need a bachelorette to say g’bye to my single days. I felt like I had already done that the moment Steven and I made it official. On top of that, I had taken the majority of my 20’s to live it up as a single girl. I’ve partied in some pretty amazing places with pretty amazing friends. Amazing places like Puerto Rico, Punta Cana, LA, Miami, and Vegas just to name a few unforgettable ones.

So why Vegas? Being the west coast girl that I am, I initially wanted to do it in LA but my girl Cindy couldn’t take the busiest weekend in Vegas off since it was a no-no for anyone working in the Vegas industry. Cindy is one of those friends that mean the whole world to me so even if I couldn’t see her the entire weekend, I at least wanted her to be around so she can dip in and out of the festivities during any free time she could catch.

I’ve done Vegas before plenty of times but never at this level. This is what our weekend consisted of: 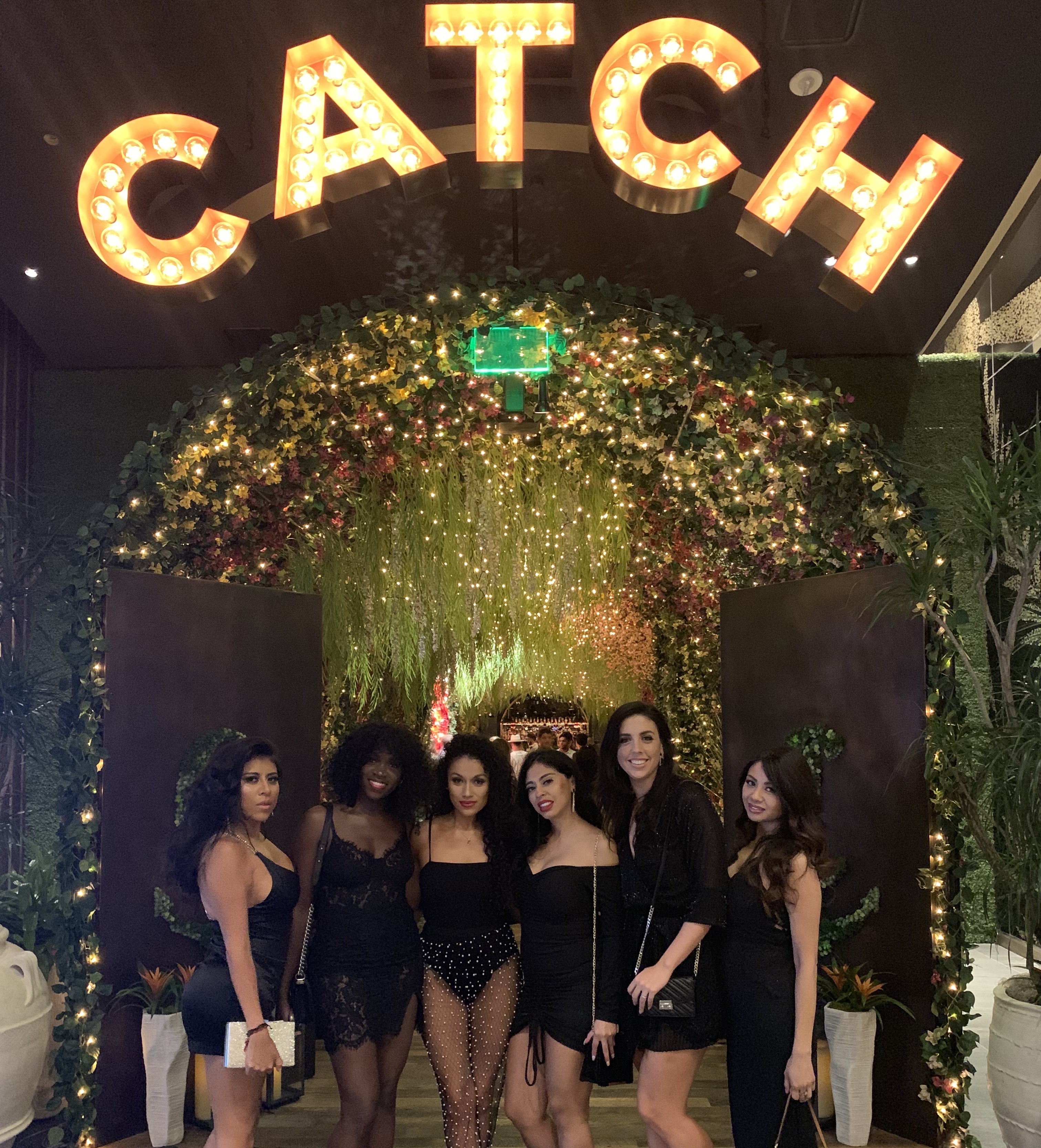 Our outfit theme for this night was black “Death to my maiden name”. We ended up getting to our hotel room in the evening which left us with a couple of hours to get five girls ready for our dinner at Catch inside of the Aria. I love Catch. Steven and I have been to the one in LA before and it was so good. I love, love, love seafood and mixed with the pretty floral decor, makes it a good time always. I swear we tried everything on the menu that night. Cindy had made the reservations and planned the meal for us.

The plates kept coming, at one point my girl Daryl asked when it was going to stop as she downed her 6th glass of champagne, because oh yea, they kept the champagne coming too. 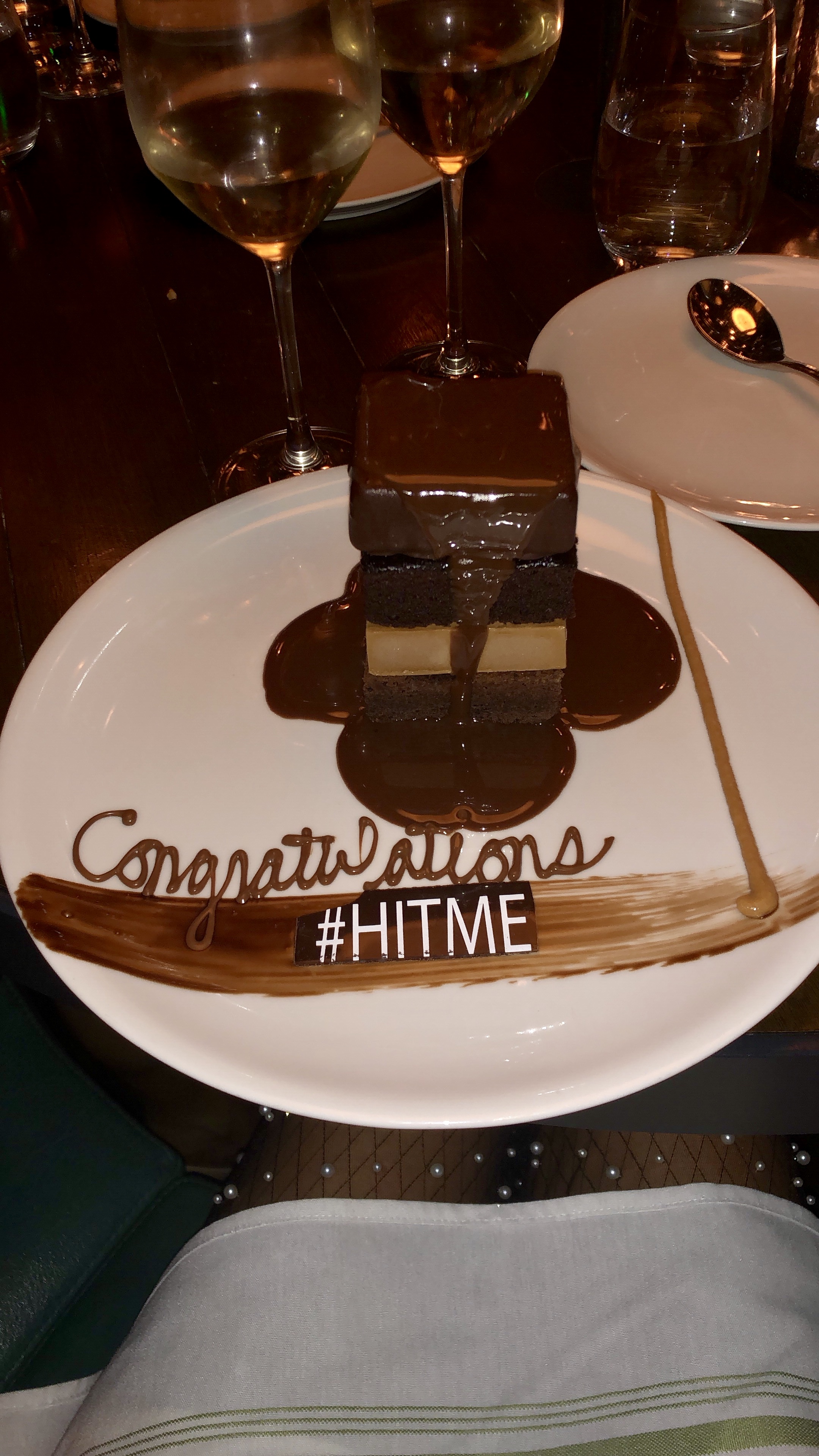 I could barely get through the desert, I was so stuffed, it literally gave me the Itis. We ended up getting out of the restaurant at midnight. A couple of my girls ended up going to the club while the majority of us called it a night since we had an early spa appointment the next day and didn’t feel like being hungover for it the next day. 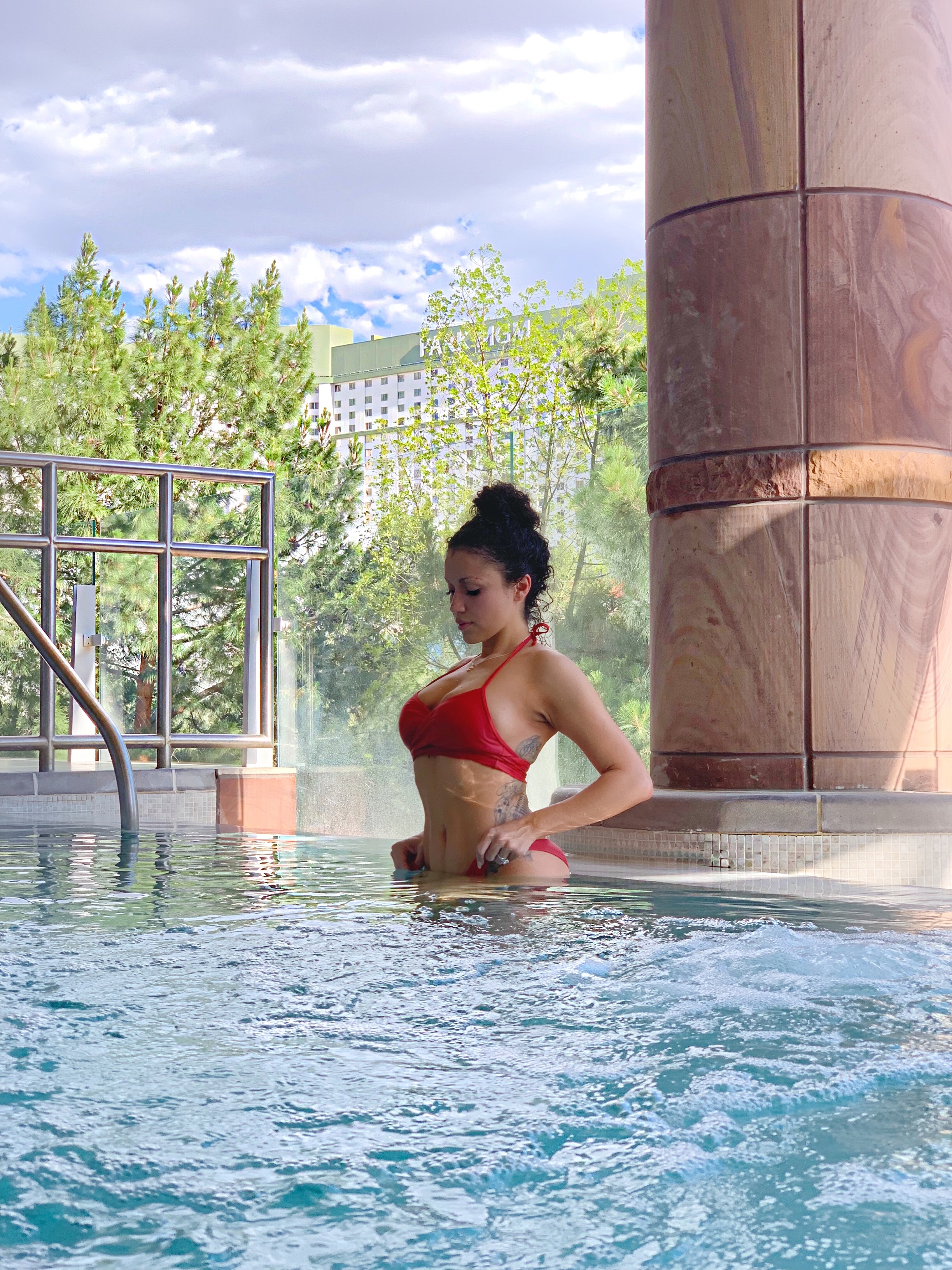 Cindy had made all of us appointments at The Spa at Aria so that we can have a spa day together. Out of all of the festivities, this is the one I was looking forward to the most. As a working mama I hardly ever get time for myself or even a few seconds to relax. I’m always stressed about work, keeping a toddler busy, and running a household.

A couple of my girlfriends went in to treat me to a massage and I damn near cried. It’s thoughtful things like this that break me down. I didn’t know how bad I needed this until the moment I fell asleep on the mesus and started snoring. 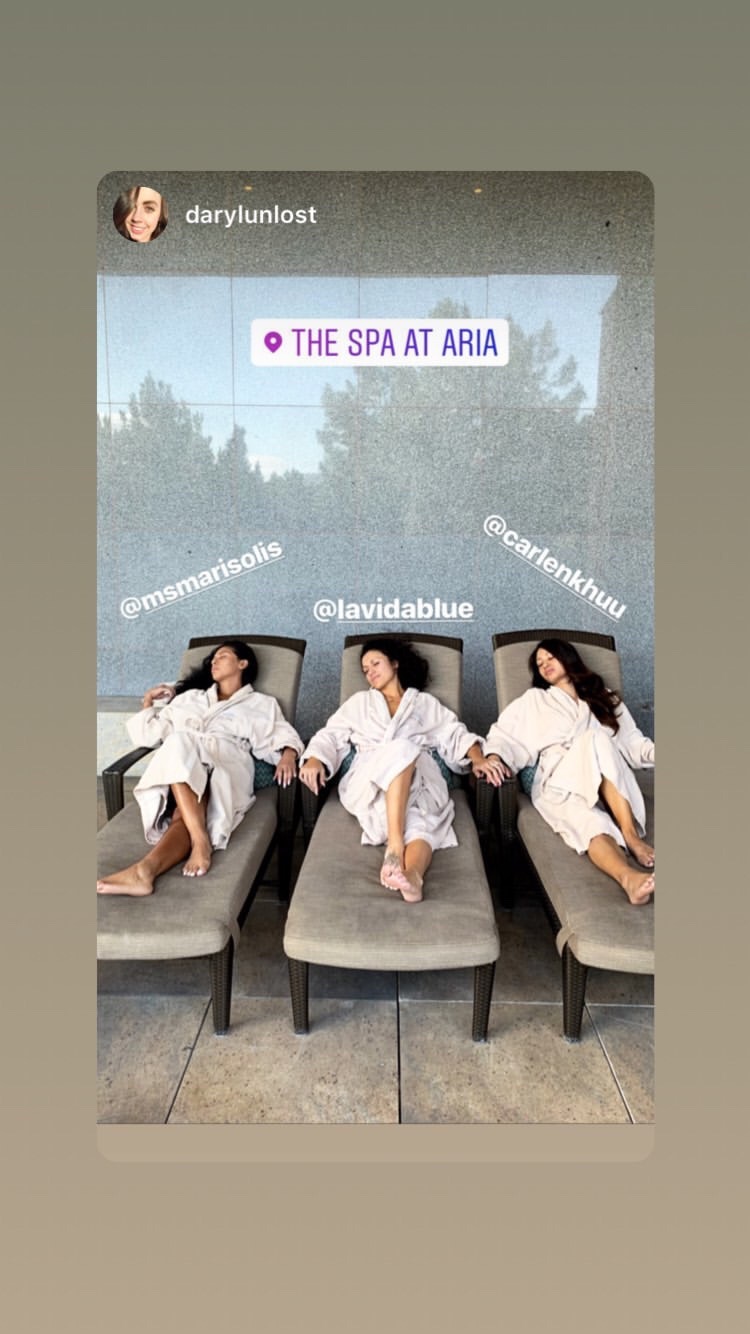 Jumping from the steam room to the sauna, to the lap pool, the jacuzzi, and cold tub was the funnest thing ever. I swear we were acting like we had never been in a spa before and I was totally loving the peacefulness and the ratchetness of twerking any time we were alone. 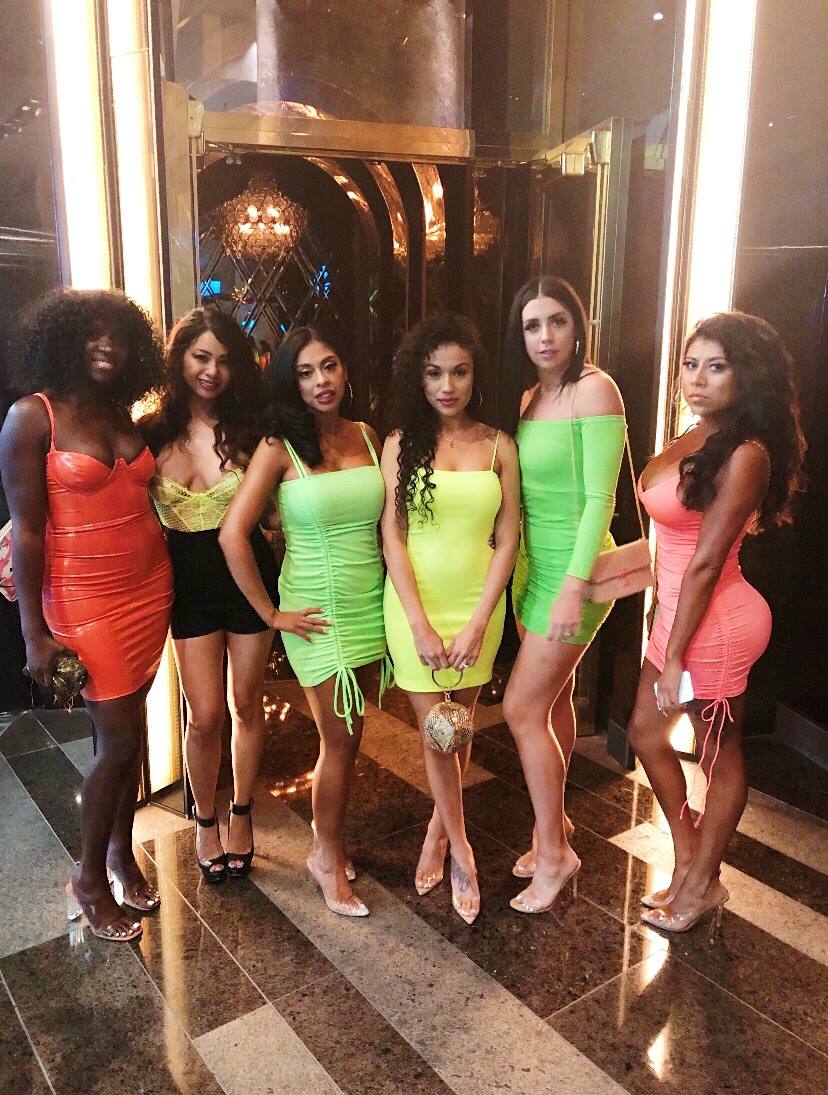 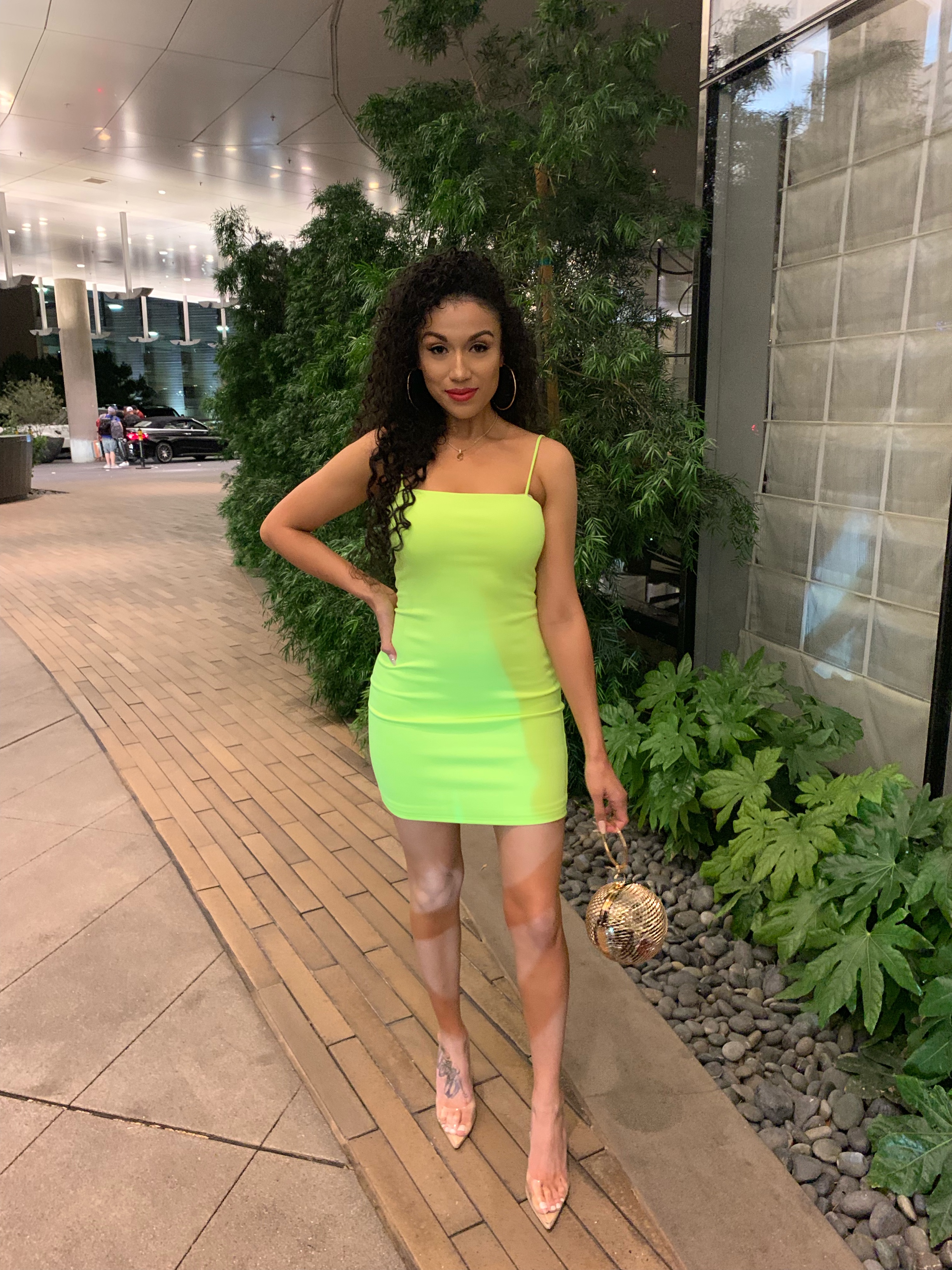 Neon was the theme for our dresses, “For a bright future as a Mrs.” My girl Marisol had come up with it and I thought it was a fun idea. Especially because I’m known to always wear black. 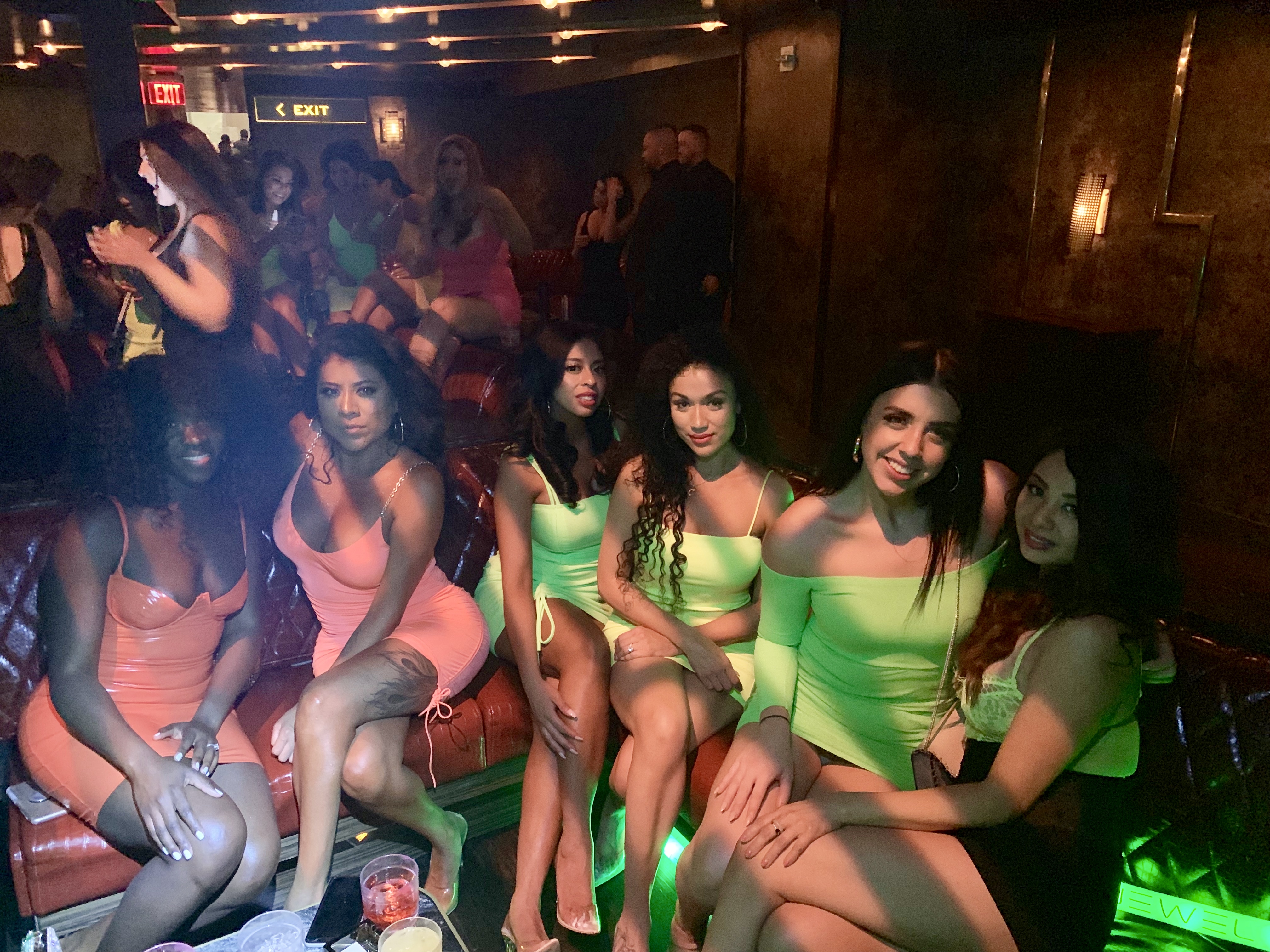 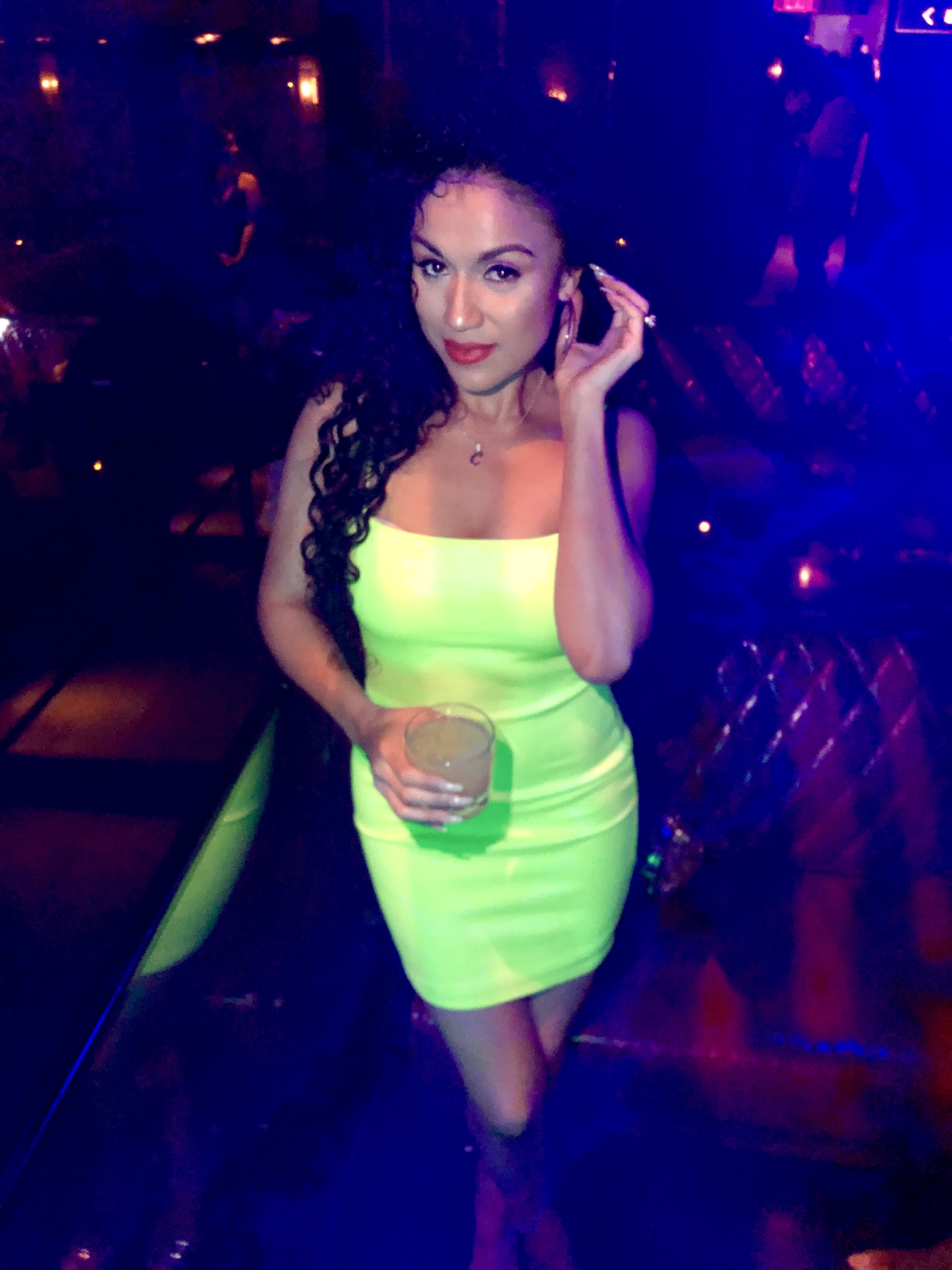 Cindy had got us a table at Jewel Nightclub, also inside of Aria. We had so much fun dancing to every song. Very rare is there a club in Vegas, aside from Drais, that can play hip hop like that. In general, I don’t dance. But if you’re killing it on the turntables, you leave me no choice. Shout out to the DJ that night and the staff at Jewel, including my girl, for taking care of us. We didn’t get back to the room until 5AM. 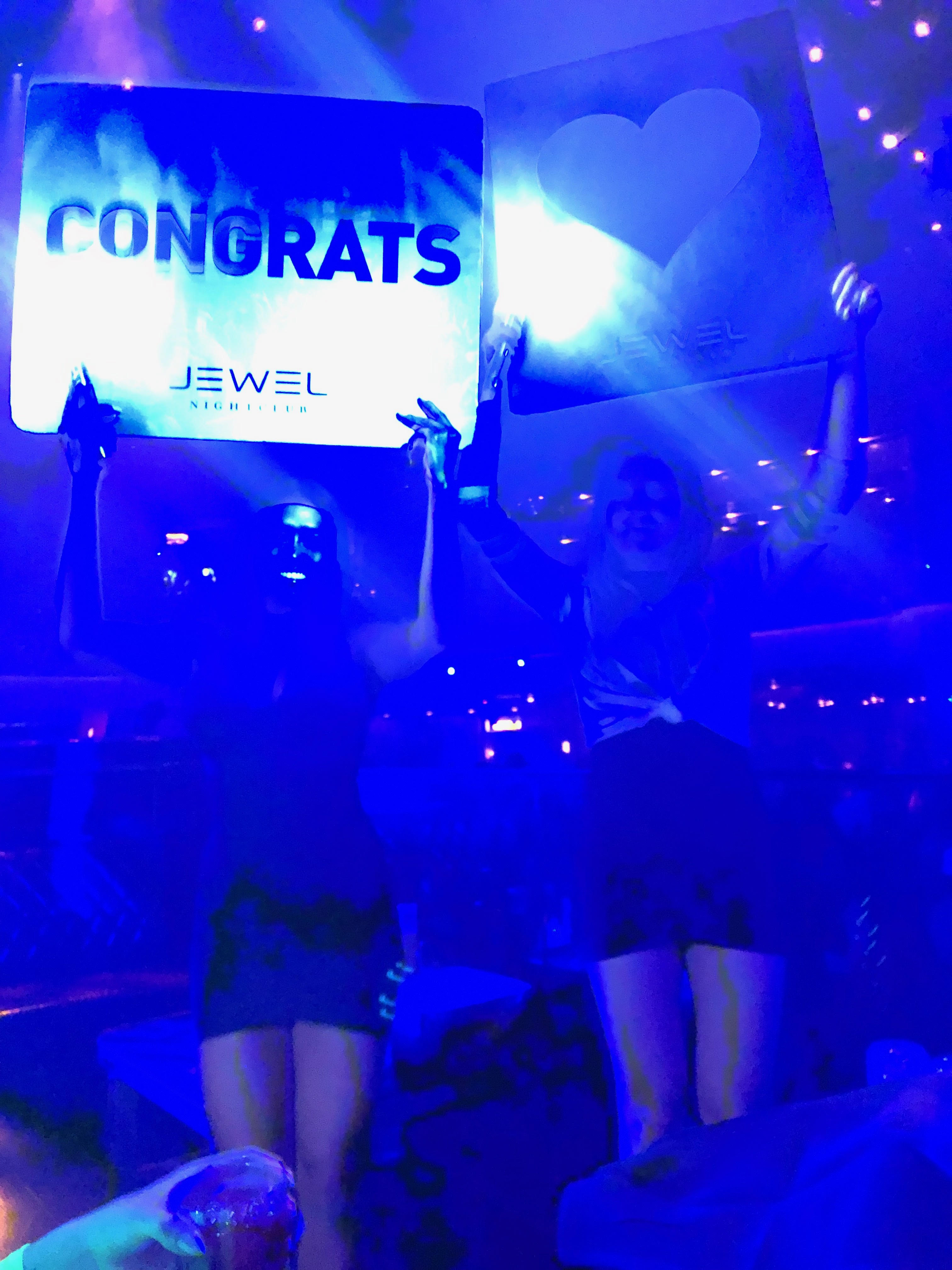 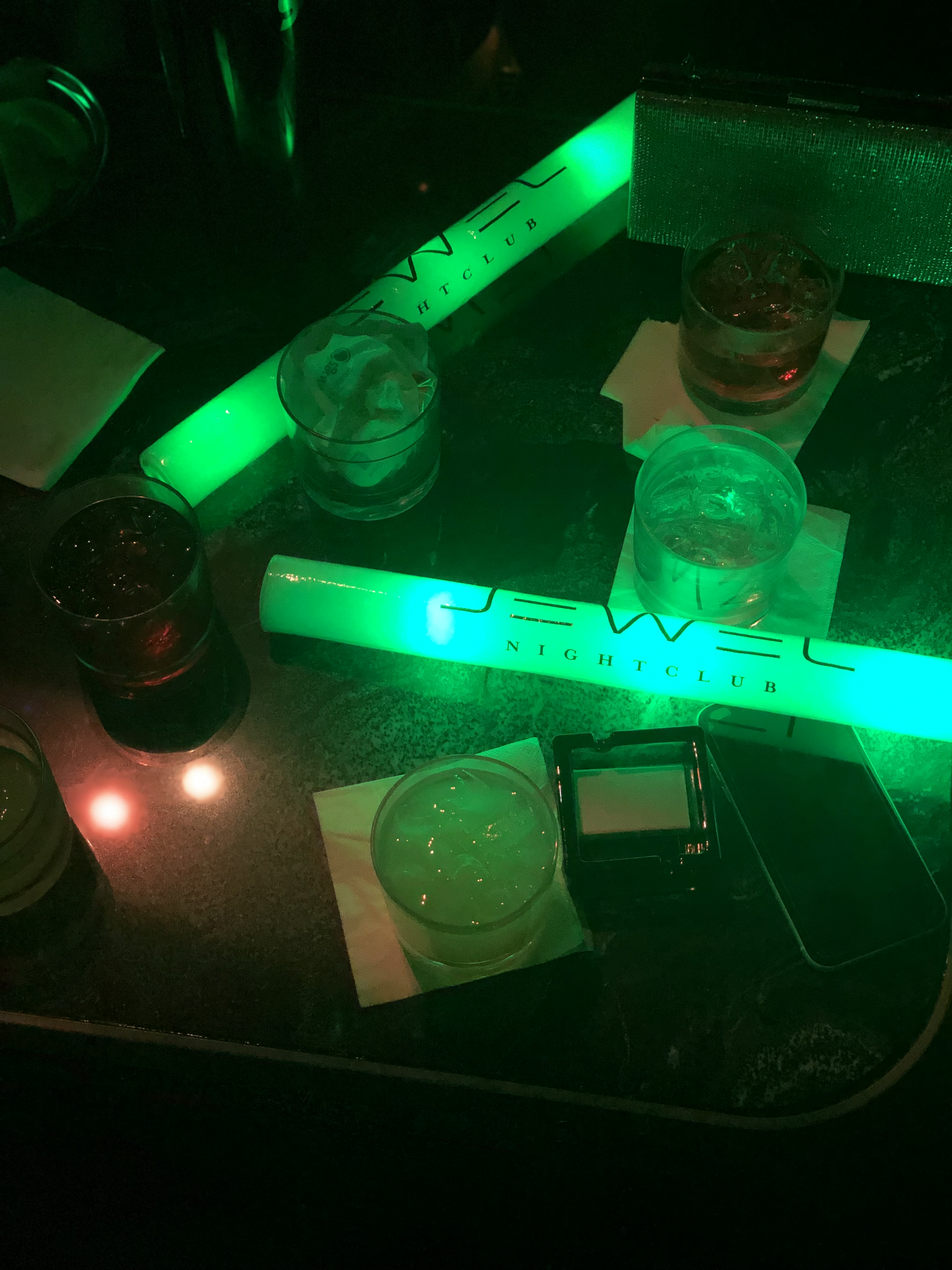 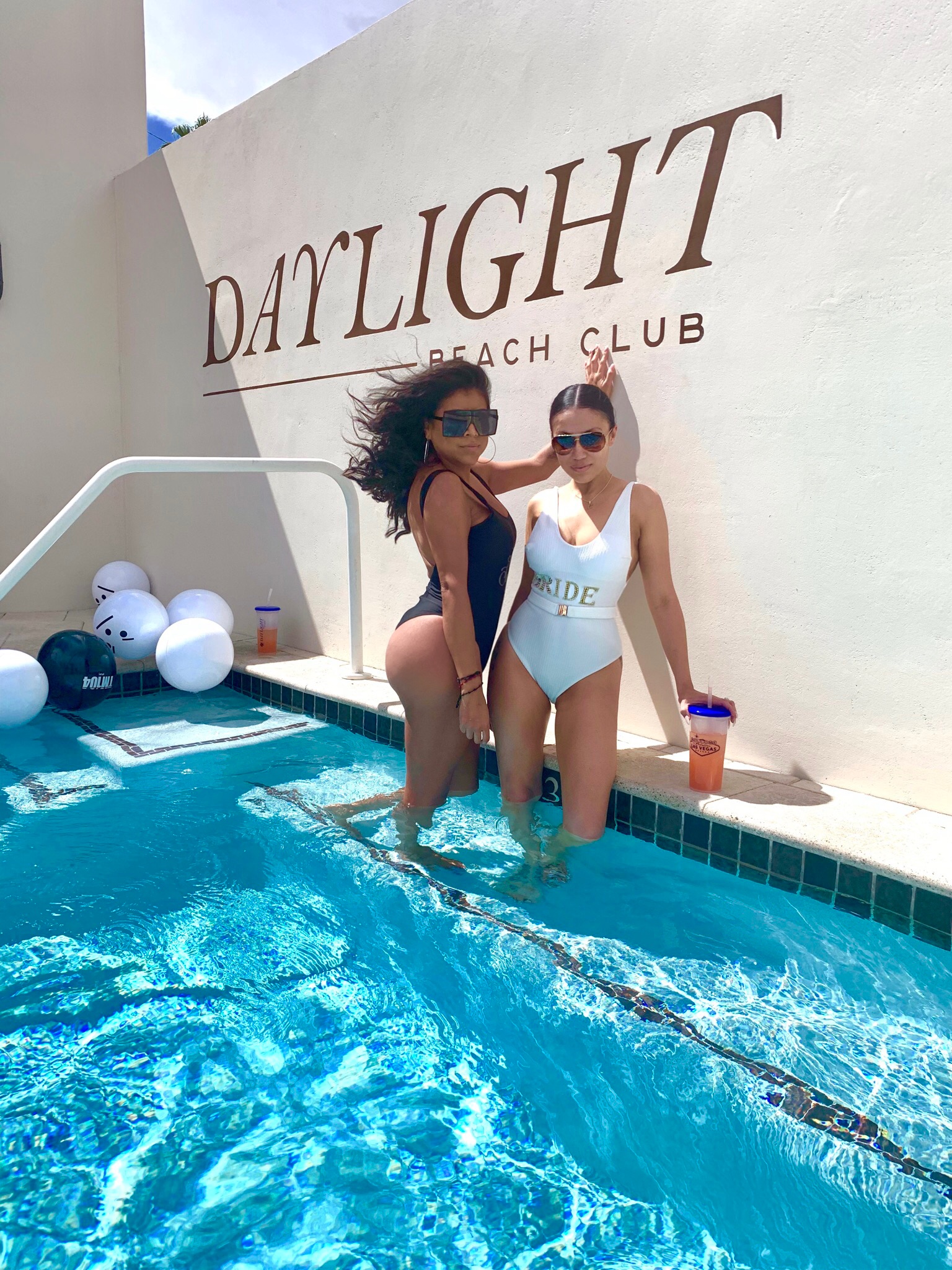 My girl Cinthia had thought of this cute little outfit for me to wear to the pool party with. She got me a white bathing suit that had BRIDE on it with a white veil. Between Cindy and Cinthia, I’m so extremely thankful and blessed to have them. I don’t have a sister so the fact that they treat me like one makes us closer than blood. 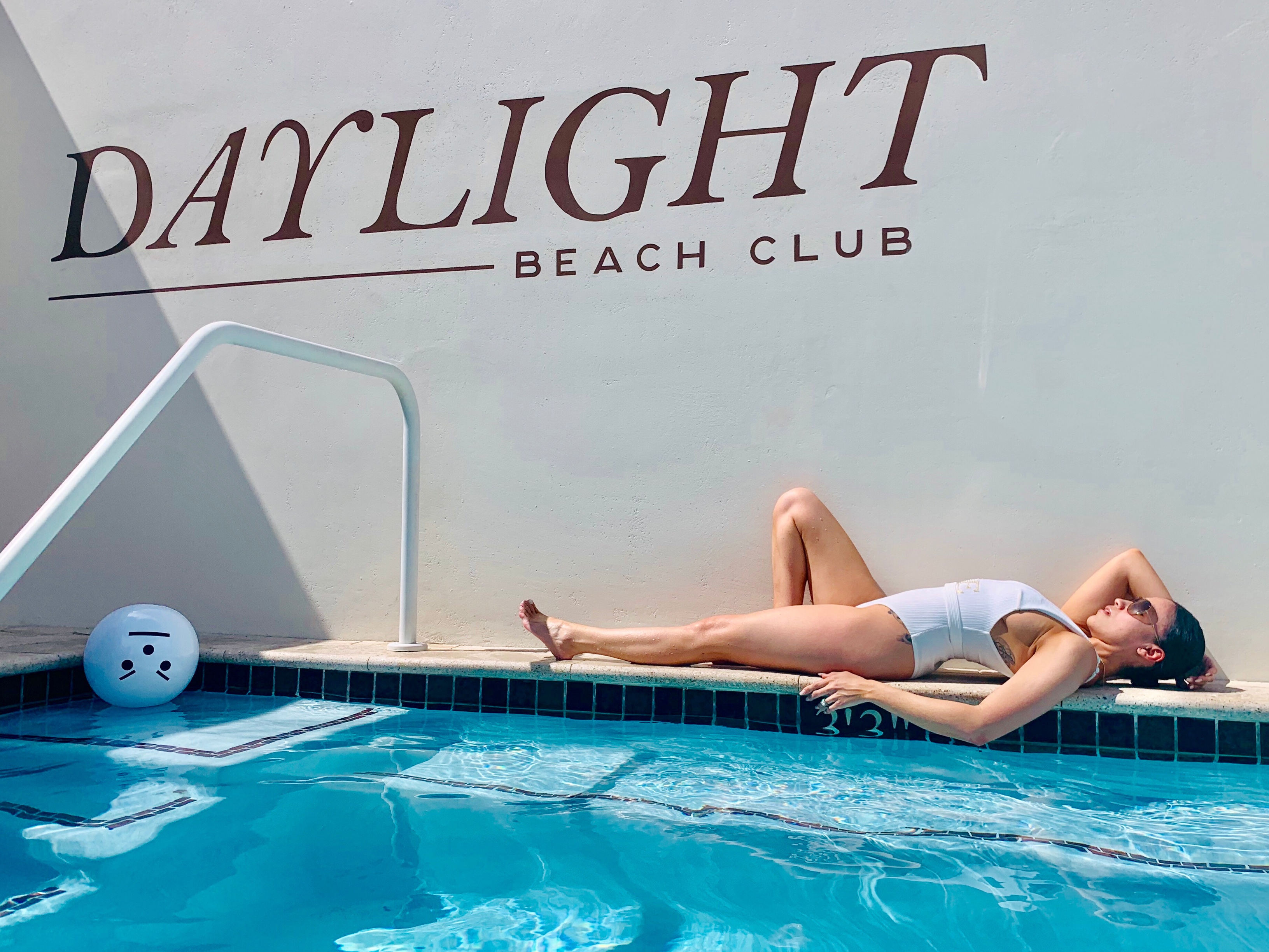 Cindy got us the private bungalow at Daylight Beach Club at the Mandalay Bay that sits next to the stage above the crowd. We had our own private pool and most importantly the best view to see my next favorite rapper after Nipsey— JEEZY!!! We were so close, I was having the best time of my life. The twerking was at an all time high between my girl Elyse, Cinthia, and myself. We even taught Daryl how to twerk and I was proud of her for trying and getting a few booty claps in. She did it! 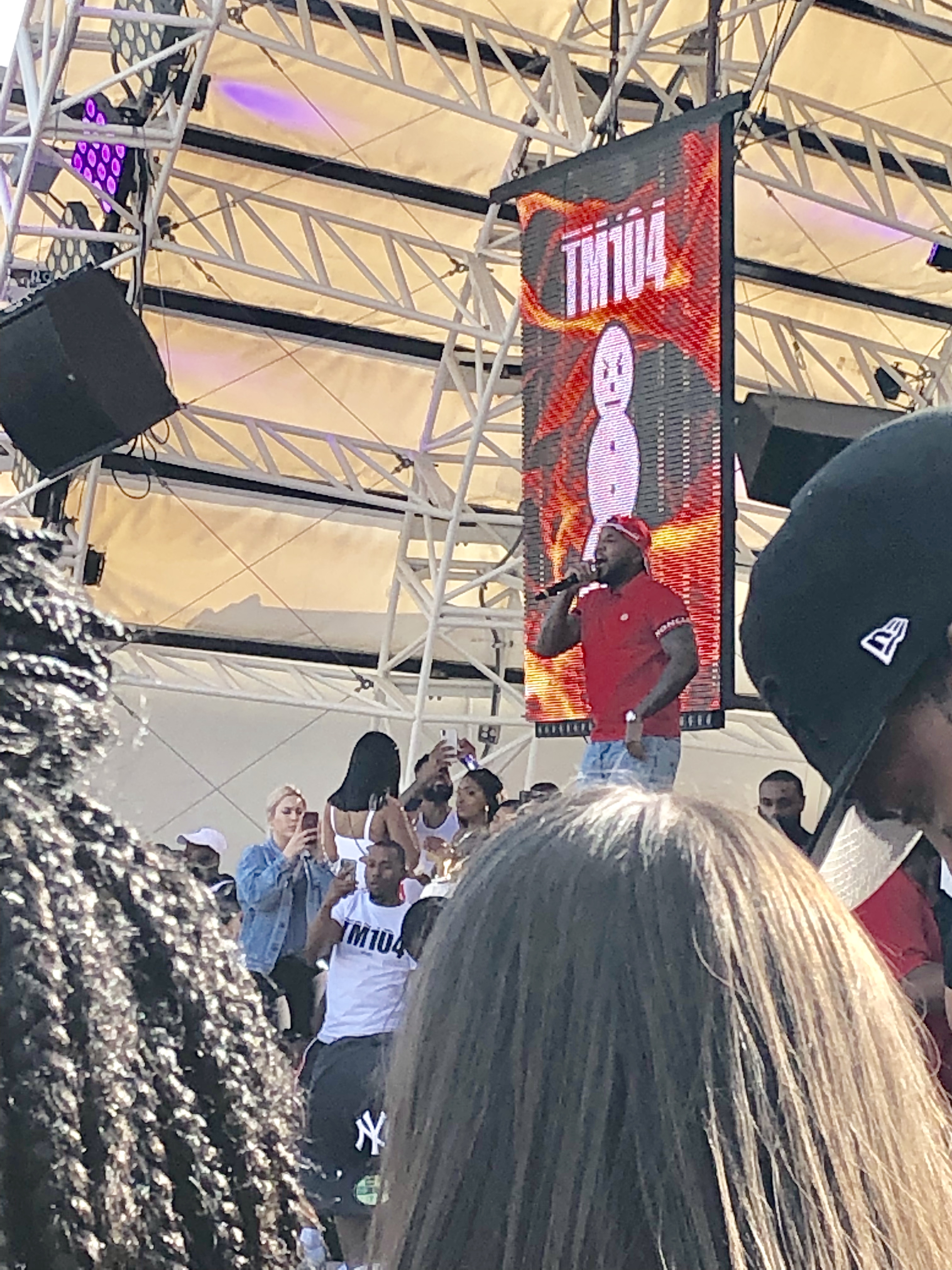 I left a little tipsy from all of the tequila shots we had and with a grateful heart for all of the little surprises Cindy had done for me. 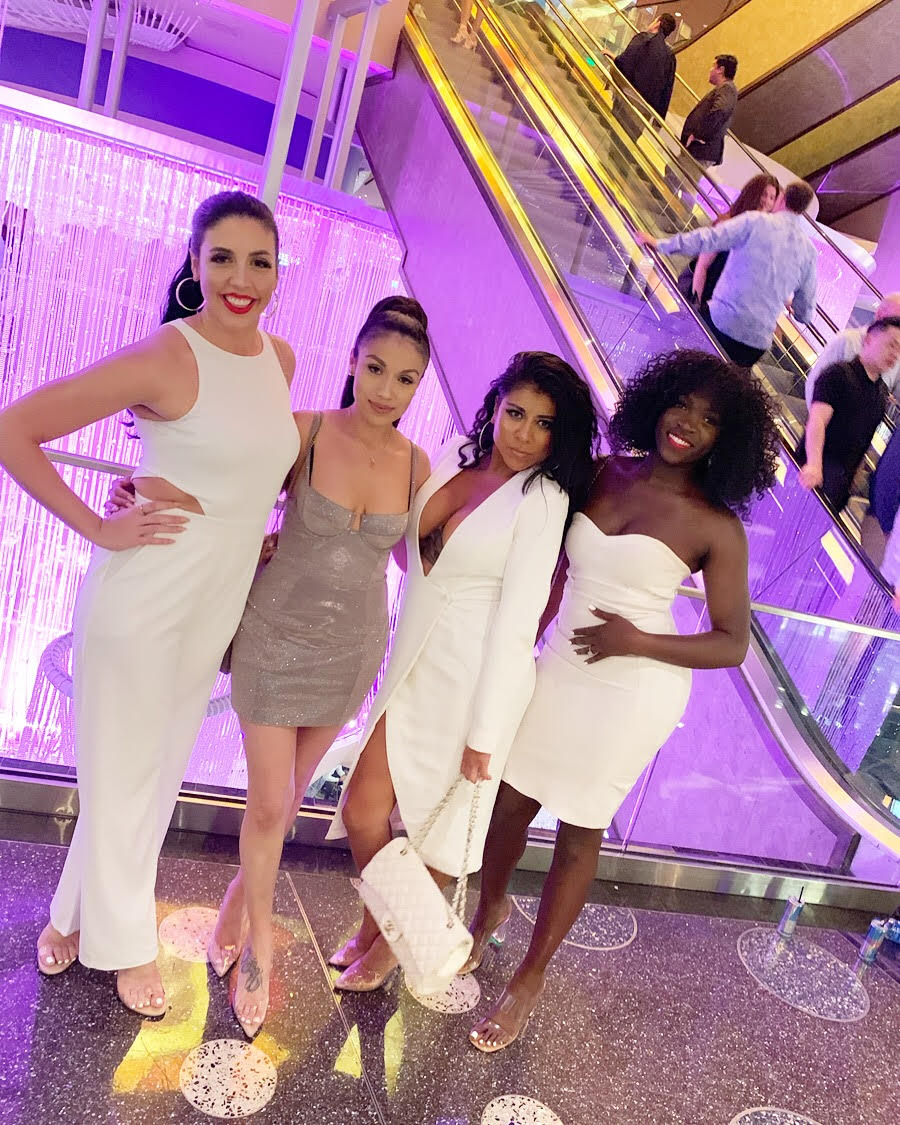 Our last night to go out with a bang. Our outfit theme this night was “Leave a little sparkle wherever you go”. I wore a glimmery mini dress and my girls wore all white.

When we got back to the room from being at the pool party all day, I was ready to call it a day. I had been tipsy and had so much fun at the pool party I could have easily called it a day but Cindy had saved the big surprise for this last night. 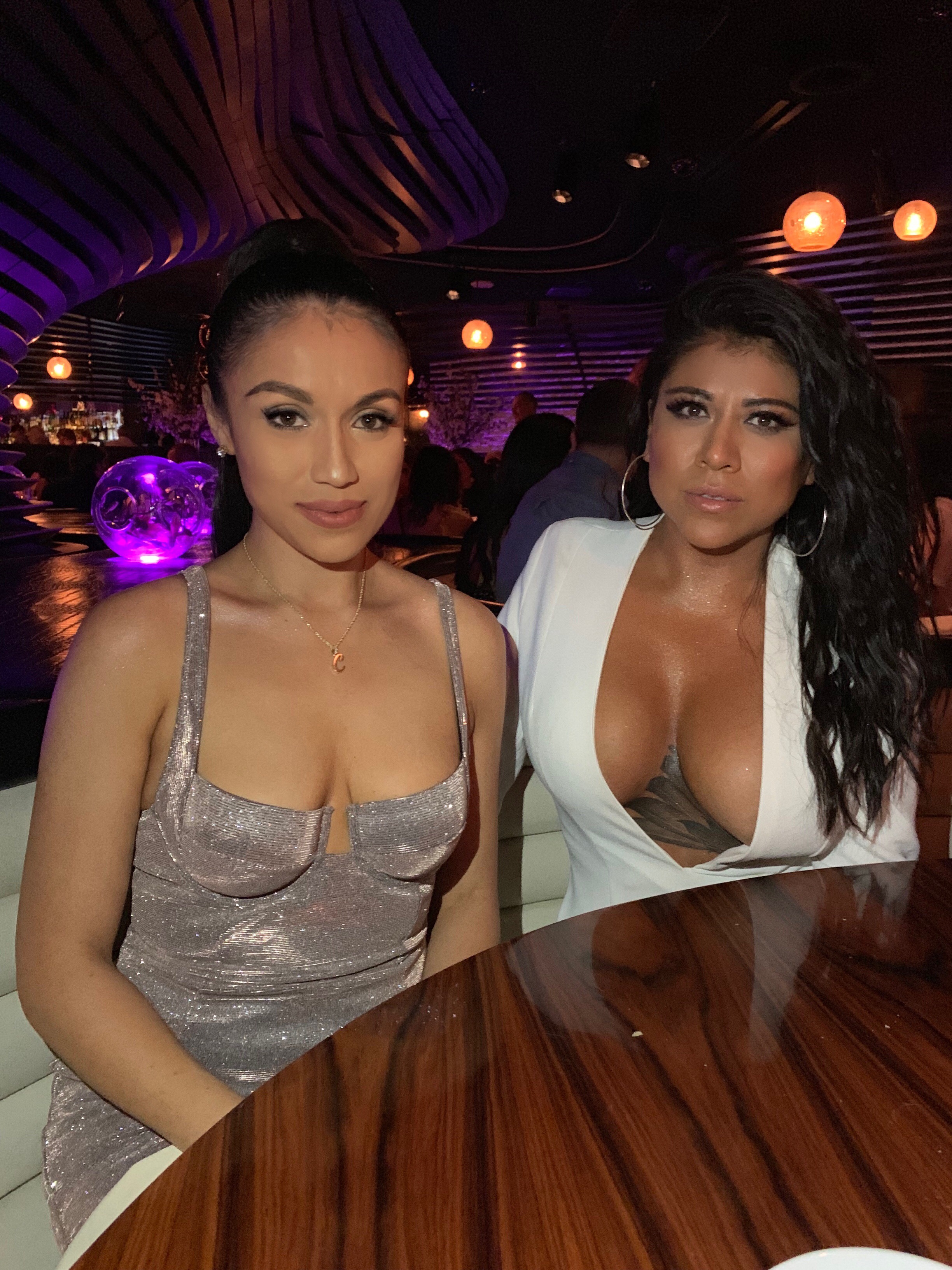 Every time I’m in Vegas there are two restaurants that I have to eat at. The first is Javier’s and the second is STK. Since Javier’s was booked up we ended up at STK for dinner this night. As soon as we got outta dinner, I get a call from a driver. The whole time I was thinking who ordered an Uber? As we walk outside there was this huge big body truck waiting to take us to Drais. 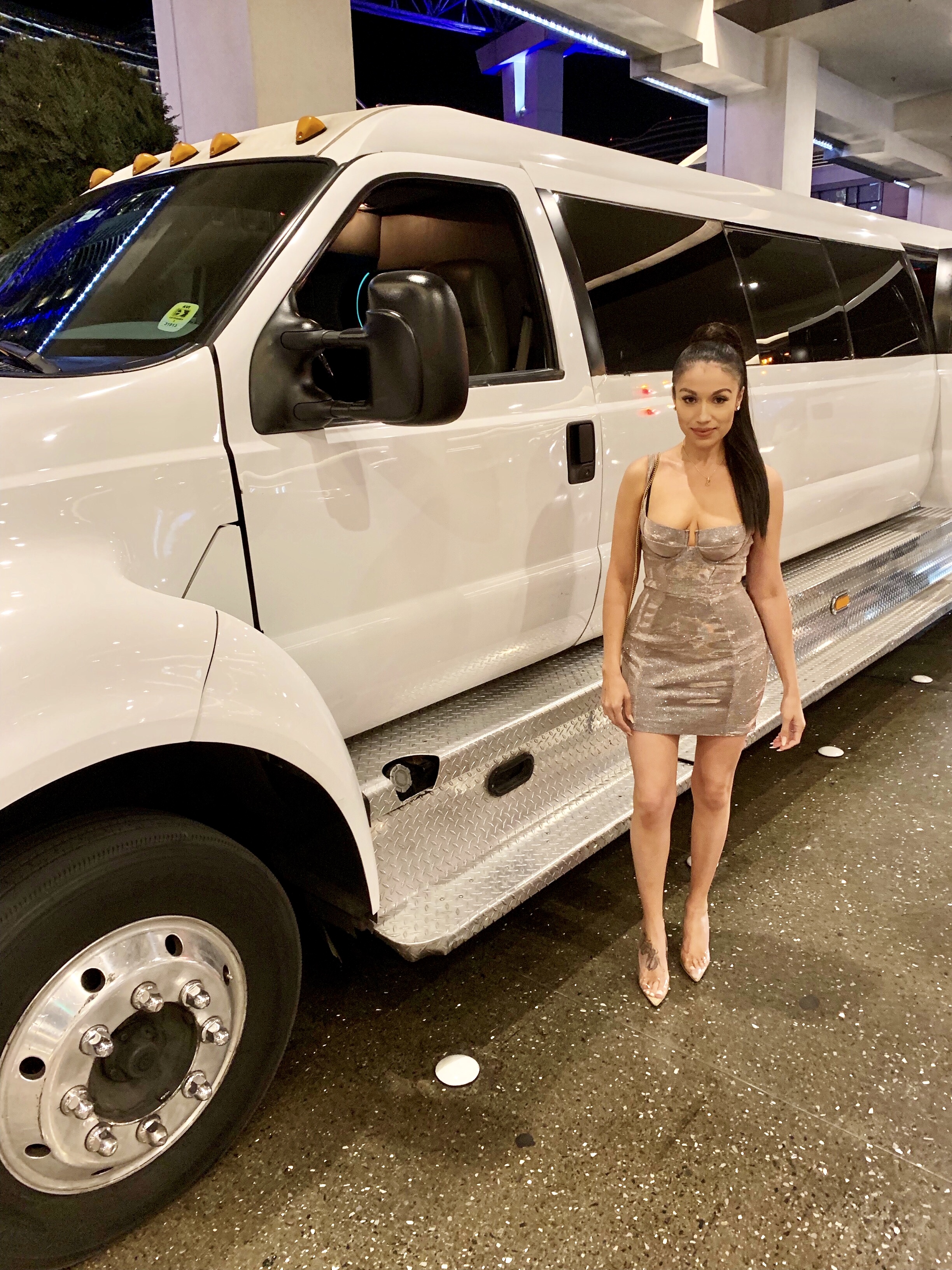 I was seriously shocked. I called Cindy like WTF?! Are you serious. She just laughed and said, “Make sure you get extra ratchet on your drive to the club and take hella videos”. I swear Elyse stole the show on the ride because ratchet is what we got. She had us laughing with her twinkle toes while Cinthia and I tried twerking with dresses that were tighter than Spanx. 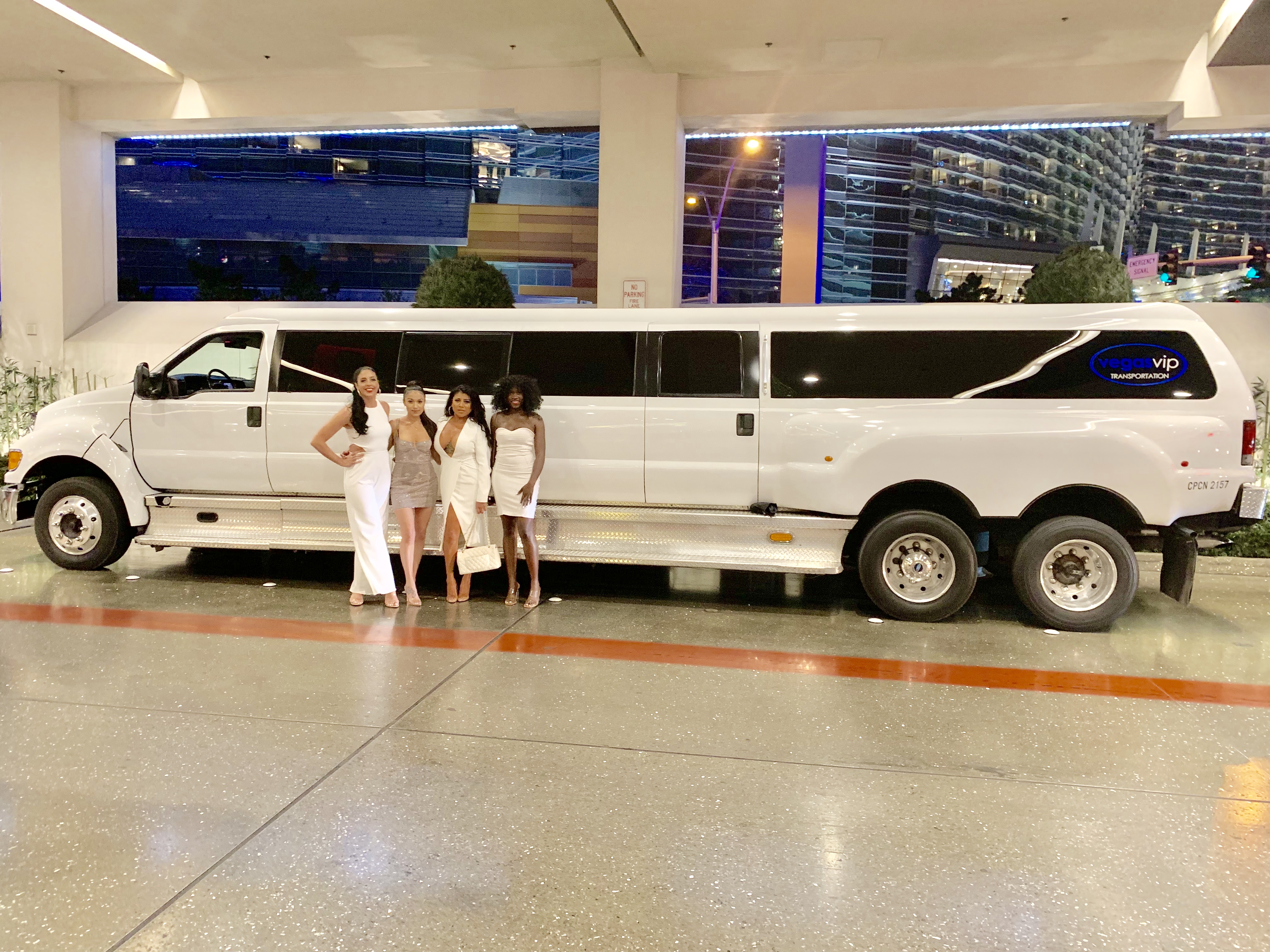 As we walked into the Drais lobby, the owner came down to get us. I was like “Whoa, that’s fancy”. As we took the elevator up I had no idea what I was about to walk into. The owner had saved us a spot at his table and as I look up there had been pictures lit up of me and my babies, including my besties. My life lit up around the whole club brought tears to my eyes. Again, it’s not material things that get to me. It’s thoughtful actions that matter the most to me and Cindy had me straight crying at the club.

As the pictures circulated around the entire club the bottle girls came out with round 1 of my favorite drink, Jameson. I know, I know, random right? I’m a dark liquor type. I can’t do the light vodkas or tequilas. I love whisky, bourbon, scotch, and cognac.

The next surprise? 2 Chainz performing just steps from us. Another one of my top 10 rappers that I love to watch perform. He’s came out a few times to Sundance in Park City and I never miss it. Again, we didn’t get to our room until 5AM which brought me back to all of those times I came out as a single girl with my girlfriends and we wouldn’t come back to the room until the sun came out.

Cindy, no matter how I try to say thank you, it will never be enough to show you my gratitude and appreciation for going out of your way to make sure I had the best and most memorable experience of my life. I’ll be telling my grandbabies about this everytime our wedding gets brought up. It’s one of those once in a lifetime moments that you can never forget no matter how big or small. Thank you for making it bigger than life. I love you.

Side note: I apologize for the quality of these pictures. I didn’t want to bust out my bulky Canon camera in the middle of all of this.